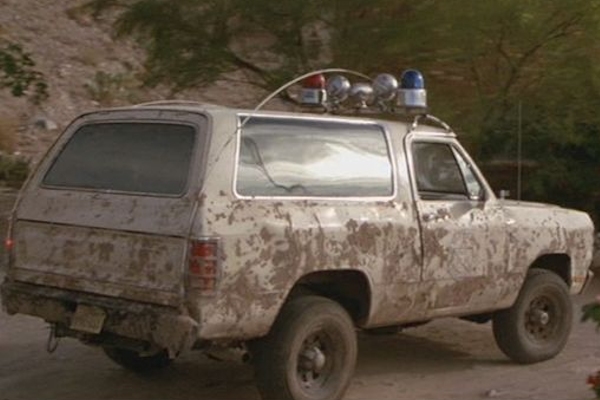 Look at that beast.  Our manly movie car of the day!

This is a supercharged Dodge Ramcharger, as used by alpha male Chuck Norris in the supremely manly ‘Lone Wolf McQuade’ (1982).  Even though the movie was filmed in ’82, the truck itself is an ’83 model.  I’m going to speculate that the makers of this Cannon Group movie saw Mel Gibson use a supercharger to nice effect that year in Mad Max 2.

I’m not sure which engine is in this truck, maybe someone can clear that one up.

Either way, real men do superchargers.  None of this turbo crap, blow off valves are for hairdressers.  Fact.  Of course, the Dodge is also used to manly effect throughout, such as pushing lesser girlie-men vehicles out of mud and, incredibly, even ‘ramming’ itself out of being buried alive!  Observe…