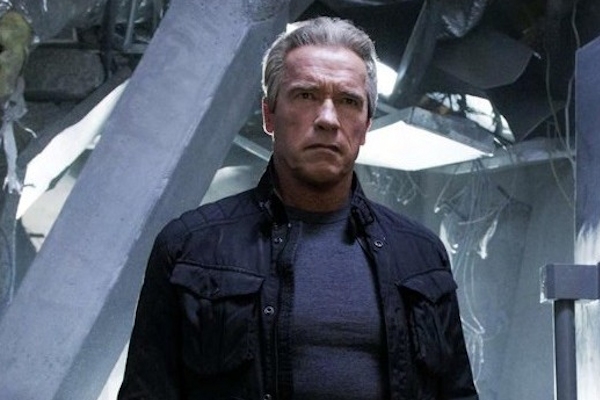 Runtime: 125 Mins
Rated: PG-13
What To Expect:  A sickly, trashy movie that makes Arnold Schwarzenegger look like an old fool

I know there are some people out there who have conditioned themselves to lower their expectations for this movie, yet still harbour secret hopes that it might be ‘okay’ or even the ‘third best’ movie in the series.  Well I’m telling you, do not see this movie.  That includes for the purpose of morbid curiosity or for some nostalgia kick.  You will regret it.  It’s not third on the list of best Terminator movies, it’s first on the list of worst Terminator movies.  I think it’s safe to say I categorically hate Terminator: Genisys and everything about it.  It’s a desecration of two classic movies… shame on James Cameron and Arnold Schwarzenegger for trying to shine us on.

See, the story is the first thing that gets to me about this movie.  The film zooms back to 1984 in an action that will prove to be pointless and used only as a gimmick for promotional purposes – i.e. a ton of trailers to fuel the bait and switch.  Kyle Reese, per usual, makes his way to night time Los Angeles.  Only to be confronted by Sarah Connor, a good T-800, a bad T-800, a T-1000, then our heroes jet foward to 2017, to pre-empt the foundations of Skynet.  If you’re a Terminator fan, you’ll probably be able to keep up with this, but it’s needlessly convoluted.  However, if you’re a kid, under the age of 15 or maybe even 20, I’m sure the story of this movie is borderline baffling and probably comes across as a complete mess.

That’s odd, because they’ve obviously ditched what they consider to be financial ballast, the adult-orientated signature vibe of the series, the menacing tone… to cast a wider net and draw in those young fishys.  So the movie targets a young audience, without emphasizing with the fact that they probably don’t know who is who or what is what. Obviously that means the grown ups among us won’t be satisfied either.  For example the future war intro sequence looks like something from a poor man’s X-Men movie, not the blighted holocaust we remember from the Cameron-sphere.  They’ve basically screwed everyone in what is a huge marketing scam.

And the film does indeed look cheap, with particularly awful CGI, and I’m not just talking about Schwarzenegger’s younger T-800.  Later in the movie you can clearly see Schwarzenegger’s face superimposed onto the head of someone, perhaps a double, with effects that look like something from a YouTube parody video.  There’s also the usual signature amateur hour action trope, the kind of shit you’ll see in a Paul W.S. Anderson movie.  I mean, when the T-1000 in this movie forms its hand into a blade, there those cheap, cringey ‘blade’ noises to highlight how kewl it is, you can probably tell what I’m getting at there.  Think that sounds cringey?  Getting vibes of the stuff you disliked about the previous two movies?  How about a ‘comedy’ mugshot scene where Schwarzenegger is at the cop station, with the Cops theme playing in the background?  Yeah folks, utter despair are the words we’re looking for here.

I’d also like to voice my displeasure at the casting of this movie.  Jason Clarke is a terrible John Connor.  He does not look like he’s been through a war as the leader of humanity, instead he looks soft, like someone from human resources in an office block.  The same goes for Emilia Clarke, who does not look like the ‘mother of the future’ in any form.  Too soft, too cute.  You feel like someone should be protecting her and keeping an eye on her, light years removed from Linda Hamilton’s badass SWAT momma.  Jai Courtney’s Kyle Reese, who obviously came upon a stash of steroids that Michael Biehn somehow missed in 2029, is wooden at best, insulting at worst.  Finally, I feel embarrassed for Arnold Schwarzenegger.  This is not how he was supposed to round out his career… in desperation, he has trampled on his own iconography.

A cynical, tragic cash grab where Terminators don’t Terminate and memories are shat on.