Updated: Lundgren's '4GOT10' Gets Trailer | ManlyMovie

Updated: Lundgren’s ‘4GOT10’ Gets Trailer

UPDATED 2x: I’m adding the North American trailer for this movie, you can check it out above.  It seems they’re sticking with the title ‘4Got10’ instead of ‘The Good, the Bad & the Dead’, or at least 4Got10 appears to the title for North America.  Starting the movie with 4 puts it at the top of certain VOD databases, which is the reasoning behind the odd title.

UPDATED:  The poster for this movie has surfaced.  Check it out below.  We’ll also be rounding off our Skin Trade coverage soon with an interview with Lundgren’s co-star Tasya Teles.  Stay tuned.

Previously: It looks like Dolph Lundgren is churning out movies like a machine gun at present.  Here’s another one, 4GOT10, a movie he has recently wrapped also starring Danny Trejo. 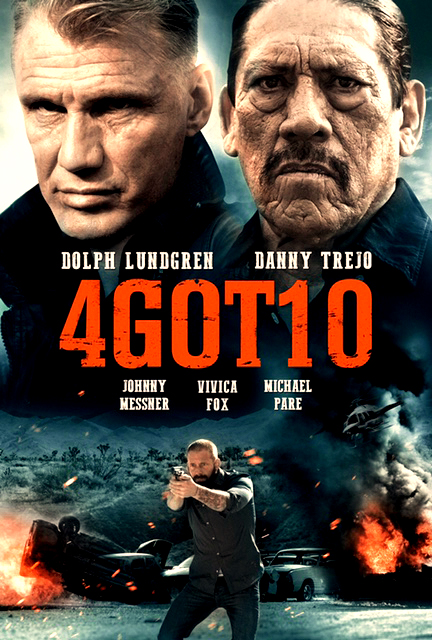 With “4GOT10”, Sean Ryan masterfully paints a picture of a mind twisting thriller in a gritty, dusty world where money is king. Director Timothy Woodward Jr.’s vision created a modern, semi-western style which he’s described as “Django Unchained” meets “Memento”.  In addition to his talent, Timothy is known for giving his actors the freedom to improvise, and encourages their creative input to help the scenes flow organically. He recently wrapped “Checkmate” which stars Danny Glover, Sean Astin, Vinnie Jones and Mischa Barton.

Brian Barnes [Johnny Messner] wakes up in the desert wounded and with no memory and no idea why he’s surrounded by eight bodies, a van with four million in cash and a van full of cocaine.  Brian is pursued by not only notorious drug lord Danny Perez [Danny Trejo] who desperately want his money back, and DEA Agent Rooker [Dolph Lundgren], but also a by the corrupt Sheriff Olson [Michael Pare] who will stop at nothing to get his hand on the new found fortune. On the run, Brian discovers the more he remembers the less he wants to know about who he really is.