A while back I set out to buy this game on the street, I had forgotten to order it online, so it meant doing things old school, looking for a game on release day.  I was surprised at how unavailable it is and how much game shelf space has shrunk.  Eventually I found it at a game store and was advised that I might as well take the steelbook special edition, since it was the same price as the standard edition.  This is a review of Mad Max on the Sony Playstation 4.  It’s the first Mad Max game since 1990 and the first I have personally played, if you don’t count Thunder Road, a 1984 board game that upon Googling, wasn’t actually officially a Mad Max property.

Mad Max is loosely a prequel to Fury Road.  It sees the title character wander the wasteland in search of peace although further to Fury Road’s reboot status, it doesn’t really delve into the history of the man, for example his time with the MFP (Main Force Patrol).  He butts heads with Scabrous Scrotus, son of Fury Road’s Immortan Joe.  Scrotus’ men do the worst thing possible, steal Max’s ‘Black on Black’ Interceptor and he must naturally endeavour to have the keys returned.  Along the way a disfigured hunchback, Chumbucket (a blatant rip on Ephialtes from the movie 300), offers to build Max the crème de la crème of combat vehicles, the Magnum Opus, assuming Max beats up enough assailants in various camps and collects scrap to make it possible.

I’ll get the negatives out of the way first.  My main problem with this game is the incessant brawling against human waves of enemies, once you enter their camps on raiding trips.  A common scenario is to encounter a dozen or so enemies and get into a brawling match, which requires button mashing the square button, with the occasional tap of triangle to perform a counter.  Per the movies, your shotgun is used sparingly, so enemies can’t be dealt with often using it.  The collection of scrap can also prove to be repetitive, and we’re not even talking individual parts.  Walk up to a scrap icon and hold X to collect it, in order to buy parts for your Magnum Opus.  Those are my only complaints, but these could double if you’re not particularly into the main movies or cars and the differences between a V6 and V8.

On the upside, this is a game for fans of the series.  The freaks and oddballs are here.  The rusted vehicular carnage is here.  Even if it practically does not exist within the original timeline, it sure does feel like a Mad Max world.  Cars are a big deal here, you’re basically role playing your way to building the ultimate speed demon beast.  Upgrading the Opus is fun, you can upgrade its nitrous system (come on, this is Mad Max), weld superior ramming tubing to the nose, adjust the suspension, fit weapons, upgrade the tyres.  I kind of had more fun tinkering the beast with my freak hunchback and his infectious enthusiasm for performance mods than the actual story to be honest.  The scrap collecting might be tedious, but the pay off is worthy when you upgrade your paint scheme, BHP and other features.  If you’re both a gearhead and a Mad Max buff, this game could eat away your spare hours. 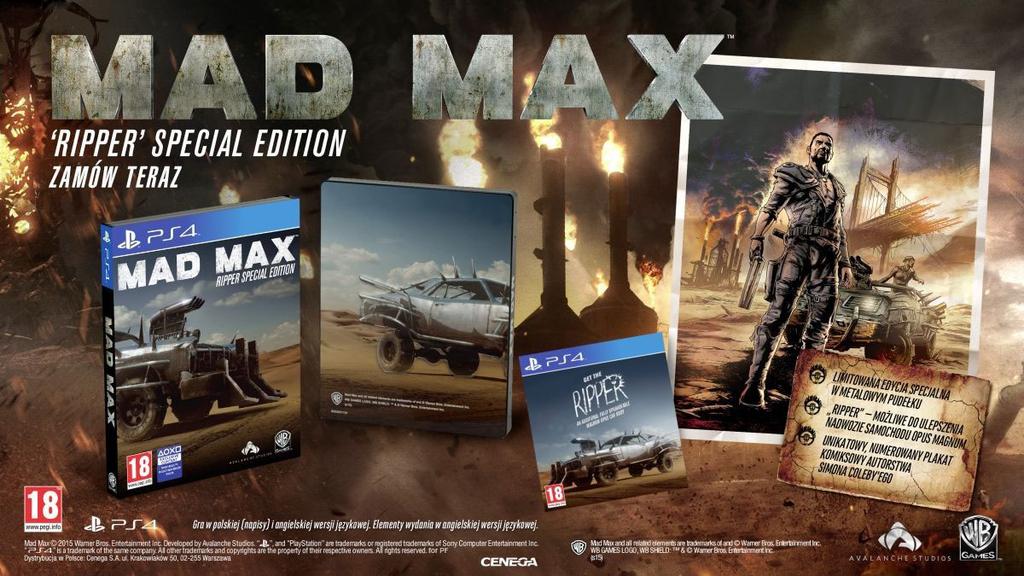 As mentioned, I inadvertently picked up a steelbook special edition of sorts, the Ripper edition.  This version comes with extra DLC.  The Mad Max: Road Warrior pack and Ripper car shell (to put on the chassis of your Magnum Opus).  It comes with a fold out poster and a steel casing that has a thick durable plastic sleeve, the type that absolutely can’t be ripped unlike a throwaway cardboard sleeve.  To be honest, the only thing that’s worthy here is the packaging.  The ‘Road Warrior’ DLC merely contains some nostalgic decorations for the nose of the car, for example Lord Humungus’ hockey mask.  And even then these things are not instantly available via the usual method of inputting the code to the PS Store.  It merely allows you to find them, which isn’t easy.  Or worth it to be honest.  But the steelbook feels good, weighty, heavier than a movie steelbook on account of all of the files, instructions and what not inside.

Bottom line: Mad Max could very well seem like a mediocre slouch, if you’re not interested in cars (what man is not?) or Mad Max lore.  And to be honest, who cares about those people?