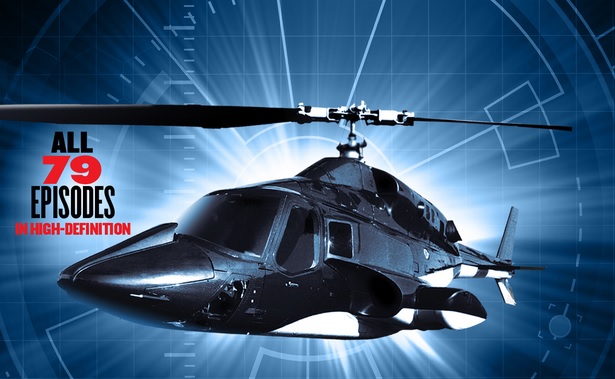 I reviewed this a year or two back when it had somewhat of a stealth release in Europe.  A smaller distribution company sent the Blu-Ray edition to me and for some reason, it wasn’t released in many places.  Now the series has gotten a Region 1/North American release.

I’d forgotten how good this TV series was, or at least didn’t appreciate how good it was when first viewing it decades ago as a kid.  Back then you could appreciate the acrobatics and chain-gun vengeance antics of Hawk.  But returning to it, it’s nice to find that it’s not a bad Cold War thriller either. Having realised that, it’s almost a perfect time to revisit Airwolf.  Airwolf was almost the more mature actioner series from the ’80s, not only with deeper substance but an actual body count to boast of.

The premise is was always good.  A stealth helicopter capable of mach 1 is sold by its creator to the Libyans and the world’s best attack chopper pilot is contracted to return it – since it’s the only prototype in existence and the blueprints were destroyed.  He retrieves it but hides it as a bargaining chip to recruit its owners to find his MIA brother.  Of the three seasons, season one is probably the best.  Whereas season 2-3 are more action-orientated, the first season is more mature, it’s more of a Cold War thriller than a straight up action show with lots of intrigue and geo-political jousting.  It also uses more orchestral music compared to the digital and often cheesy score of the other two seasons, almost like it was catering to an older demographic.  The pilot was even edited into an R-Rated TV movie version, complete with F-Bombs and more intense violence – although that rejig of the pilot is not included in this set.

That’s not to say season 2-3 are inferior, they’re just as entertaining but for different reasons.  There’s more action and the pacing is picked up notably while still keeping quite a bit of the Cold War theme.  If the first season is a Cold War thriller, the second two seasons could be described as something closer to the A-Team, with more domestic affairs and the chopper being used more often as a weapon of vigilantism.  If compensation was needed or if that could be interpreted as a dip in narrative quality, at least production values seem to have been upped (minus scoring).  The chopper is filmed much better from season two onwards, the director makes it look more menacing and sexier. And the cinematography is improved.  The show is not perfect though.  It can sometimes jump the shark or have what are clearly ‘filler’ episodes.

One other thing that sets Airwolf apart from the likes of rivals like The A-Team is that it’s most certainly more violent.  The running joke of that particular TV series was that no matter how many bullets were fired, nobody ever got killed.  People get killed in Airwolf and Captain Stringfellow Hawk is a colder, harder man that Colonel Hannibal Smith.  Hawk does not share Smith’s rosy outlook in life and can often end an episode having killed 5-10 people.  The troubled Jan Michael Vincent was perfect for the role in that sense.  This retained throughout, I’d worried that they’d soften him up for season two, but in the very first episode he kills a crooked Sheriff – with extreme prejudice.

After the initial release of the movie version of the pilot (the R-Rated version), it courted controversy for being one of the single worst ‘High Definition’ transfers ever… almost being a direct VHS port.  So naturally this release was approached with caution.  But Fabulous Films really went to town on this particular set, taking the original 35mm prints and restoring them from the ground up.  The result is probably the best that Airwolf will ever look, running in a clean and highly detailed 1080p/24.  At times the bitrate reaches a staggering 48MBPS – anything over 40 is still considered less than common even by today’s Blu Ray standards.  I’ve commended recent Blu Ray movies for getting north of 30MBPS.  The downside to all of this is a near complete lack of extras and stereo audio (although still DTS-HD).  The 4:3 ratio may actually put many off too, but keep in mind, that’s how it was originally filmed.  It would’ve been nice to have the fourth season, bad as it was, that R-Rated pilot and at least one documentary.  But overall, we’re lucky to get a reissue in the first place.

This version appears to have different artwork than the European release.  Better, in my opinion, it looks slicker and more modern than the other uninspired release.  We’re also gifted the fourth season here, which wasn’t available with the R2 box set.  But this is weak stuff, many of the action scenes are stitched together from old footage and if you binge on the box set, you’re even more likely to notice this.  The quality of the fourth season’s picture is, I guess, passable.  But I did note some heavy smoothing in some areas and then in contrast, a ton of grain in others.

It’s not quite a home run but it’s a beautiful achievement.  Thematically the old bird has aged well and looks very crisp and plush.  They don’t make ’em like this anymore.