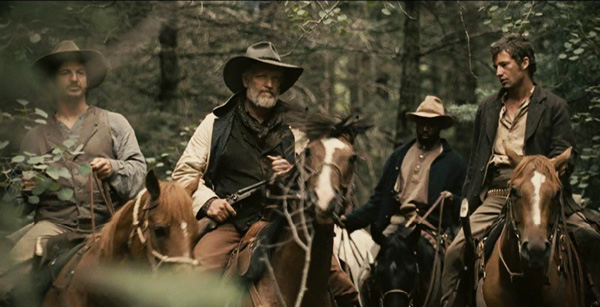 The Burrowers may have spent the last eight years creeping around under a few folks’ radars, but if Bone Tomahawk has left you with a nagging appetite for another western/horror hybrid, it’s easily worth digging up for a viewing.

It’s 1879. When a family of settlers vanish from their home on the frontier, four men, led by the formidable John Clay (Clancy Brown) set out to rescue them, assuming that they’ve been abducted by hostile Indians. The clues, weird spiral sink holes and twitching corpses excavated from shallow graves,  begin to point to something more sinister, however, and the posse soon find themselves under attack not only from trigger happy Ute warriors, but also a clan of blood eating subterranean mutants.

The Burrowers really took me by surprise. I was expecting something akin to Tremors, but apart from the fact that the mysterious monsters live beneath the Earth’s surface, it’s really nothing like it. Whereas Tremors, an old favourite, is brimming with funny wisecracking and good natured humour, The Burrowers is far more brooding and pessimistic. What we have here isn’t just a much more serious attempt at a horror movie, but actually a very cleverly written western, with something to say about humanity, or the lack of it. For me, the dialogue and characterisation is just about on a par with the likes of Bone Tomahawk and Slow West, two of my favourite films of the last few years. Some scenes are also in the Sioux language (and French, briefly) which further adds to the film’s credibility as more of a thinking man’s movie.

The decent cinematography works with the muted colour palette to lend the film a convincing feel of the old west and the score, by Joe LoDuca doesn’t do any harm either. And, you’ll be pleased to hear, that director J.T. Petty also delivers in terms of the quota of manly violence, which is, at times, sudden and unexpected and at other times more protracted and torturous.

But it’s not all sun-shines and rainbows. Where the film succeeds admirably as a solid, contemporary Western, it does fail to some degree as a creature feature. For me, the burrowers themselves were kind of ropey and brought down the otherwise serious tone of the film a notch or two. At the same time, I do respect the film makers for using practical effects and not ruining everything with shitty CGI, which would have come off a lot worse. The monsters are actually more like the creatures in The Descent than the more family friendly Graboids of the Tremors universe, in case you are wondering.

Where the inhuman characters are a little less than convincing, the human cast do a fine job. I liked Irish actor Karl Geary as the unassuming hero trying to rescue his sweetheart. I have to confess that I didn’t realise I was watching Clancy Brown until the credits rolled. He’s looking a little grey these days, but he’s still great and cuts just as imposing a figure as he ever did. Doug Hutchinson, everyone’s favourite villain, Eugene Tooms, from the X-Files, makes an appearance as well, and is as despicable as ever (and I mean that in a good way).

Because it was so different from what I expected, I feel like I need to watch The Burrowers again before I can properly digest it and take on board everything it has to offer. But it will probably be a while before I have the time, so for now I’m going to give it a carefully considered 7 out of 10 and a fairly hearty recommendation if you like westerns, or horrors, or both.