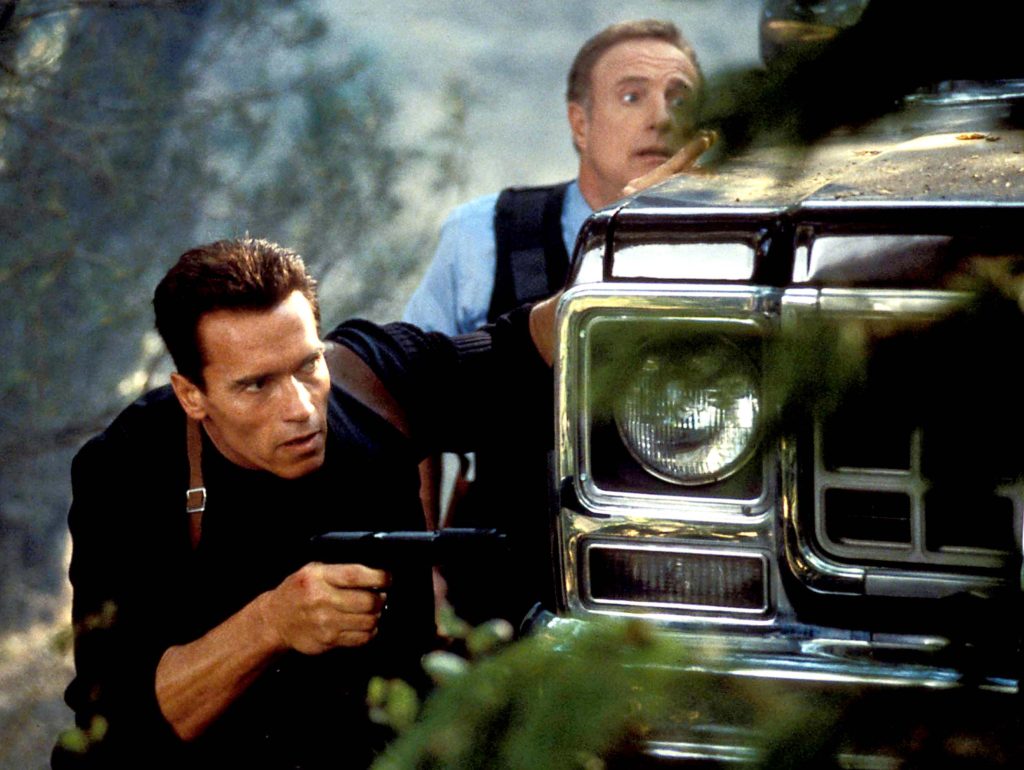 Hard to believe “Eraser” came out 20 years ago. Is 1996 truly the last golden year of big, bravado, larger-than-life action filmmaking? I mean, it has Arnold Schwarzenegger at his prime kicking ass and taking names, it has Sonny Corleone himself as the main villain, and a high-concept plot with weaponry that straight-up borders science fiction. If anything would’ve made it better, it would be James Cameron.

But well, Chuck Russell will do for this one. Fresh off Jim Carrey’s “The Mask”, Russell directs the Austrian Oak through a pedestrian script (co-written by Walon Green of “The Wild Bunch”), with both star and director injecting much-needed energy into the film, making it another classic Arnie vehicle with a top shelf life. It’s not going to win any awards, but who gives a rat’s ass about that when Arnold Schwarzenegger is wielding dual EMP rifles and firing away at everyone, the image above says it better than words ever will.

Yes, those new-fangled rifles is the center of the plot around the film, where Vanessa Williams’ exec of the weapons manufacturing company gets marked for death by corrupt FBI agent James Caan, who intends to sell the tech to overseas people who aren’t very nice. Enter U.S. Marshal John Kruger a.k.a. ‘The Eraser’ (Good Lord, he was already cool with a name like John Kruger, and you nicknamed him The Eraseras well?!). Kruger specializes in making material witnesses disappear for good from their enemies, so naturally Williams’ plight is assigned to him by Kruger’s boss, played by a slightly-underused James Coburn. Unfortunately, it doesn’t do you much good when the enemy happens to be Kruger’s mentor, played by James Caan who is having a blast with his villainous role, spewing lines such as “I can’t believe you nailed me with this cheap piece of mail-order shit!”

The film was made between the “Die Hard” and “The Matrix”, so it adheres to the rule of action movies of that era that the hero has to display some sort of vulnerability, be it by body shape or by the number of wounds inflicted upon him, or both. Kruger gets bloodily impaled twice in the film, and still manages to get medieval on any soul poor enough that tries to kill him. Cars, houses, warehouses explode. Bodies pile up right after they fly upon getting shot. It IS an Arnold Schwarzenegger movie, after all, so vulnerability to him would kill John McClane 10 times over. His classic crowd-pleasing one-liners are still put to good use here though, the best one uttered after shooting a crocodile – “You’re luggage”.

On a technical note, “Eraser” is quite impressive, even for a 1996 film. The effects still hold up reasonably well today, and the stunts and explosions are refreshingly CGI-free. The EMP rifle sound like they belong in a Cameron Terminator film. Action is captured nicely with zero shaky-cam or rapid-fire editing; Russell wants the audience to savour every moment of the big action sequences – the best of which involves an airplane/skydiving sequence that ends brilliantly, and another one being the big come-uppance after Arnold’s chips are down during the film’s climax.

The film even has good humor to go in-between the explosions, the best of which hilariously involves Kruger going into a drag bar to ask for help from a mob witness he put there. It also has solid action movie music by Alan Silvestri, before his boring “Avengers” days. Plus, the always reliable Coburn and James Cromwell in strong yet brief supporting roles. It even literally ends with sheer manly badassery, abrupt yet wholly satisfying. What’s not to like?

It may not be his best, but it is perhaps the last true ‘classic’ Arnold, his last hurrah after “True Lies”. If you don’t already own it, buy it on Blu-Ray, crank up the sound system, grab some beers and burgers/steak, and enjoy the ride.