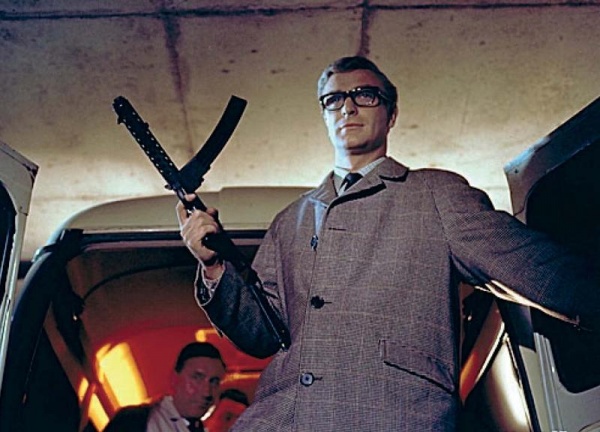 The film begins intriguingly enough with scientist, Dr. Radcliffe, disappearing from a train and having his bodyguard murdered.  We then see an alarm clock ringing and protagonist Harry Palmer (Michael Caine) waking up and putting on his signature black horn-rimmed glasses.  Palmer then goes about his morning routine as the opening credits roll, grinding coffee, ironing his clothes, reading the paper and finally grabbing his firearm.

Palmer is not a particularly patriotic spy.  After being caught stationed in Berlin scamming money out of the German army, he is forced to work for the Ministry of Defense or face significant jail time in a military prison.

Palmer works for the department performing observation duties out of a rundown tenement.   Soon after, Palmer is transferred to work in counter-espionage to find out what happened to Dr. Radcliff, a supposedly important intelligence asset.  His new boss, Dalby wants to get Radcliffe back or else the Ministry of Defense will shut his department down.

Dalby suspects that underworld figure, Eric Ashley Grantby, also known as Bluejay, is somehow involved in Radcliffe’s disappearance and feels Grantby is planning to sell him to the highest bidder.  Unlike the rest of his disinterested spy colleagues, Palmer manages to track Grantby down, using his parking tickets (a favor from a police friend).  He confronts Grantby and tells him he’s willing to make a deal.  Grantby refuses and Palmer gets into a fight with his bodyguard, Housemartin, while Grantby escapes in his car.

Palmer gets no respect from Dalby for finding Grantby.  He later finds that his flat has been broken into by a female counter-espionage agent who has been snooping around.

This lean, minimalist spy film requires a fair bit of patience from modern audiences, but those who stick with it will find it’s a rewarding experience and a far more realistic look at how intelligence agencies actually operate.  Michael Caine as Harry Palmer gets to showcase his low-key sarcastic charm and gives Palmer an understated presence.