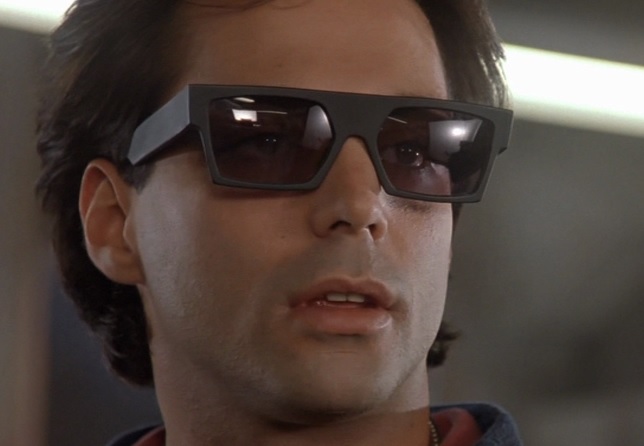 On his high school graduation, slacker Michael Corben (Richard Grieco) is shocked to discover he’s one credit shy of getting his diploma.  Fortunately for him, he’s able to fulfill his requirement by attending a school field trip to France.

In Europe, a sinister cabal led by Augustus Steranko, Minister of Finance for the fictional country of Orenbourge is devising evil plans.  Steranko’s intention is to poison all the finance ministers in Europe at a summit and in the chaos, position himself as the savior of a new European community.  His coterie includes two henchman, one a small woman named Ilsa (Linda Hunt) who uses a whip to kill her foes, and a giant man with a claw for a hand.

Intelligence agencies in the States and the UK send their best agent, Blade to eliminate Steranko.  However, Blade is effortlessly killed by Steranko’s henchwoman, Ilsa.  After this setback, the CIA sends a deep cover spy to complete Blade’s mission.  His name is Michael Corben, a spy so mysterious no one knows what he looks like.

Arriving in France, high-schooler Michael Corben is mistaken to be a real secret agent by British Intelligence and is whisked away to their underground spy base.  Corben is given X-ray specs, chewable plastic explosives and sneakers with suction pads underneath, allowing someone to walk up and down walls.  Initially denying he’s a spy, Corben quickly agrees to help when he sees the bright red Lotus sports car he’s allowed to drive.  Michael is tasked with uncovering Steranko’s nefarious plans and stopping them before they are set in motion.

One of the standout scenes in the movie is where Steranko’s well-endowed female assistant, Areola Castana is sent to kill Michael Corben using a poisonous scorpion.  Her plan goes awry when the scorpion is inadvertently tossed into her nightgown.  In her attempt to remove the scorpion, she bumps into a stereo, triggering music, making it appear as though she’s dancing.

While the muscular Richard Grieco is too old to be playing a teenager, he’s charismatic enough to pull off both the humorous and action sequences with aplomb.  Additionally, the ethereally beautiful Gabrielle Anwar is well cast as the female lead, Mariska.

If Looks Could Kill straddles the line between being an action comedy and a campy spoof.  At times, the movie feels like an extended episode of the 1980’s cartoon show, Inspector Gadget.  Nevertheless, the action is surprisingly intense and more reminiscent of Die Hard.

It would have been great to see the further adventures of Michael Corben.  If Looks Could Kill is a terrifically entertaining and funny adventure that’s worth re-discovering.