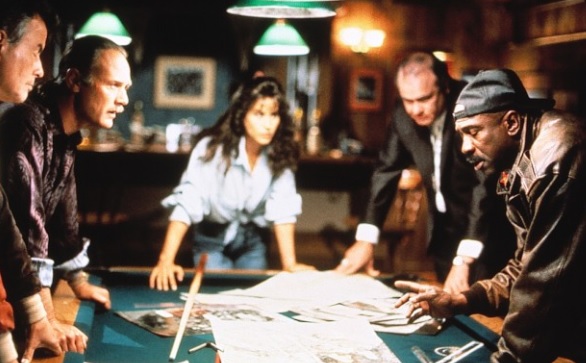 “The man, not the machine”

In Peru, a vicious criminal named Gustav Kleiss (Paul Freeman) and his gang of mercenaries have taken over an Izquitos village and forced the villagers to pack cocaine for them.  Kleiss is in cahoots with a disgruntled Air Force Base Commander and has been smuggling cocaine in barrels from Peru to a Texas Air Force base.  Any local resident that opposes Kleiss is locked in the basement of a rundown Church.

One of the leaders of the resistance, Anna Morales (Rachel McLish) a muscular young native woman is kept prisoner and chained to a ceiling.  Using her tremendous strength and bulging biceps, Anna manages to pull herself up, unhook the chain and escape aboard one of Kleiss’ drug smuggling planes to Texas.

After an outstanding airshow, Chappy is informed that one of his Air Force pilots, Ramon Morales, was shot down while smuggling cocaine from Peru.  Troubled by this revelation, Chappy goes to Ramon’s house to talk with his family.  He is confronted by Ramon’s sister, Anna who tells him about Kleiss’ evil intention for her village in Peru.  Kleiss plans to murder every worker in the town after his drug operation is concluded in five days.

Anna’s story spurs Chappy to action.  He speedily recruits his World War 2 pilot buddies for a secret mission to Peru to bomb Kleiss’ compound and save Anna’s village from annihilation.  Chappy’s squadron chooses to fly their old planes for the operation.  Their planes have been re-fitted with laser guidance systems and working missiles.

Aces is a surprisingly fun and underrated adventure.  The story is well-paced and there is good camaraderie amongst the cast.  Former Ms. Olympia, Rachel McLish makes an attractive and compelling heroine.  Even while firing two assault weapons at once, she never becomes too harsh or loses her femininity.

The movie also deserve plaudits for its practical effects, real explosions and stellar model work.  Near the end, there is a terrific scene, where Chappy’s plane bombs an aircraft hangar leading to a spectacular explosion.  In addition, there is a suitably brutal death for the main villain.

Director John Glen (License to Kill) has directed an entertaining and action packed film that would probably been a bigger hit back in the 1980s, as it feels too dated for the 1990s.  Nonetheless, Aces: Iron Eagle III is a sleeper of a film and comes highly recommended.