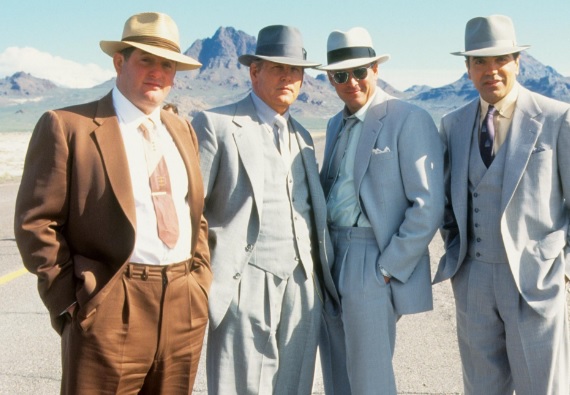 In the late 1940s, an elite squad of four Los Angeles detectives answerable only to the police chief are vociferously tackling thugs and gangsters in their city.    They are led by Maxwell Hoover (Nick Nolte).  Hoover’s crew are essentially a government sanctioned street gang. They bully, intimidate and beat up criminals under the guise of upholding the law.  Gangsters are thrown down hills and left for dead on the side of roads.  Hoover in particular, enjoys slapping crooks around with his leather shoehorn.  The squad is the post war analogue to Vic Mackey’s Strike Team from the cult FX television show, The Shield.

When the detectives are called to a crime scene at a housing construction site, they find the crushed body of a beautiful young woman named Allison Pond (Jennifer Connelly).  Back at headquarters, Hoover receives a film reel showing miscellaneous footage including atom bomb tests, a group of friends lounging poolside and Allison Pond sleeping with the head of the Atomic Energy Commission, General Timms (John Malkovich).  Attached to the reel is a phone number.  Hoover calls the number and meets with the person who filmed the footage, one of Allison’s close friends’ Jimmy Fields (Andrew McCarthy).  Fields contends Allison’s death is related to her involvement with the General and what she saw at a U.S. Air Force base.

Nick Nolte gives a nuanced and gritty performance as Maxwell Hoover.  Mulholland Falls has excellent period detail, the cars, clothes, locations and equipment are marvelously re-created.  Additionally, the score by Dave Grusin is moody and haunting.   New Zealand director Lee Tamahori (The Devil’s Double, Once Were Warriors, and The Edge) has put together a gorgeously photographed mystery that would make a great double feature with either L.A. Confidential or Street Kings.