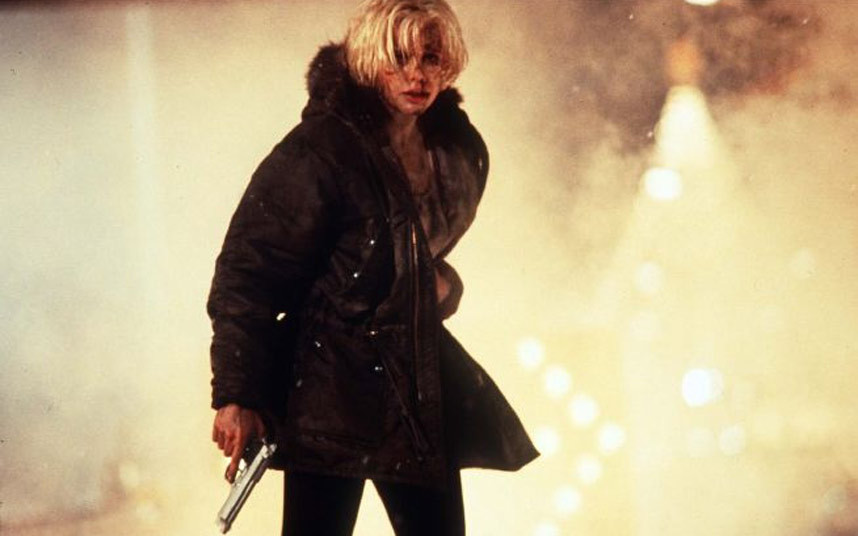 I agree to an extent that there aren’t many good action heroines. The ones we have today, are the ones the current Hollywood bigwigs use to try and push their overtly-liberal agenda, not necessarily believing in such beliefs as much as they do knowing that there’s a huge audience that’ll shill out for this nonsense. These are especially evident in the young-adult scourge that gave birth to the unholy franchises which are The Hunger Games and Divergent. Because nothing says tough and hard like early-to-mid 20-year-old girls refusing to kill enemies even as they pose further threats, because “they’re better than that”. Gimme a freakin’ break.

20+ years ago, we’ve had a few tough mommas who weren’t afraid to get down n’ dirty when it needs be. Ellen Ripley and Sarah Connor are two of only a handful of heroines (okay, maybe Furiosa too) that were more than believable when taking direct action when crap hit the fan. They aren’t there to pose for a Young Adult or Lifestyle magazine, they’re there to kill or be killed. Now, nearly every female heroine has the obligatory “strike a pose” scene whenever there’s an action sequence. I blame the Wachowski’s Matrix films, as well as the current superhero film glut, for these.

Joining Connor and Ripley in their ranks is Geena Davis’ fun performance as Charly Baltimore from Renny Harlin’s The Long Kiss Goodnight, a CIA agent afflicted with memory loss after a botched mission and assumes her cover identity, small-town schoolteacher Samantha Caine, as the real deal for years, going so far as to have a husband and daughter in the process. Soon enough, Charly’s past enemies come after her and her family, so she teams up with private eye Mitch Hennessy (Samuel L. Jackson) to stop the bad guys.

This was the second, and final, film with her then-husband Harlin (the cheesily entertaining and wildly infamous Cutthroat Island was their first collaboration), and I guess I can’t blame Harlin for overtly glorifying his wife as one tough gal – Paul W.S. Anderson did it to a lesser extent in the Resident Evil films. The key difference is that Charly looks damn good doing it and relishes every kill with glee, cracking out a one-liner here and there in the process. Imagine a female Jason Bourne mixed with Mike Banning’s sociopathy from the Olympus Has Fallen films and you get the idea. Davis, too, looks like she’s having a lot of fun in the role and not modelling to look morose. Just like Cutthroat, I have to credit her for performing a majority of her stunts herself.

I have to talk about the action sequences, they are fine and loud as hell. This was Renny Harlin at his prime – large-scale stunts and effects; lots of bright, huge orangey explosions; lots and lots of unfaked blood squibs when people get stabbed or shot (multiple times here, I might add); well-timed slow-motion sequences; crisp and shaky-free cinematography; precise action editing; an exciting score by Predator’s Alan Silvestri… with very few exceptions invoving some dodgy CGI, this is an action fan’s dream, the action is absolutely ballistic, and Harlin never short-changes on the adrenaline rush. I have to say that this is arguably his best film and one of his most overlooked throughout his entire career, and this coming from a huge fan of Cliffhanger and Die Hard 2. And the action finale… good Lord, what a finale. Talk about ending it with a bang.

Much of why the film works so well is due to the banter between Charly and Mitch. Jackson has a tendency of playing himself in nearly every film he’s in, but because the script is written by none other than Shane Black, you just know the buddy dynamic between the duo feels plausible and works extremely well. In fact, there are a lot of quotable lines as per Black’s trademark here – when one villain whips out a blade when fighting a blood-covered Charly, she sarcastically remarks “Oh honey, only four inches?” To which he replies “You’ll feel me.” Pure, un-PC gold. There’s also a very good, albeit brief appearance by character actor Brian Cox, perhaps foreshadowing his (more restrained) performance in the Bourne films?

The only major weakness I found with the script is its lack of memorable villains, because, let’s face it, when you’ve seen one corrupt government official and agent, you’ve seen them all. But probably not as well-quipped as these guys, though. Another weakness is that the film turns a tad too sentimental with a subplot involving her daughter, but Black’s writing and Davis’ acting is convincing enough to make the character’s motives seem plausible, and made me cheer for her on when she goes all out against the baddies at the film’s climax.

This movie, in my opinion, proves that a manly beer-and-steak film can indeed be made with a female lead. It’s a shame that Harlin’s and Davis’ careers never peaked again after this. Man, back when action movies were action movies, before CGI-fluff ruined everything, this kind of action reigned supreme. If Hollywood wants to make proper action heroines, in my opinion they should take large notes from Black, and Jim Cameron, too. This one’s for the Blu-Ray collection.