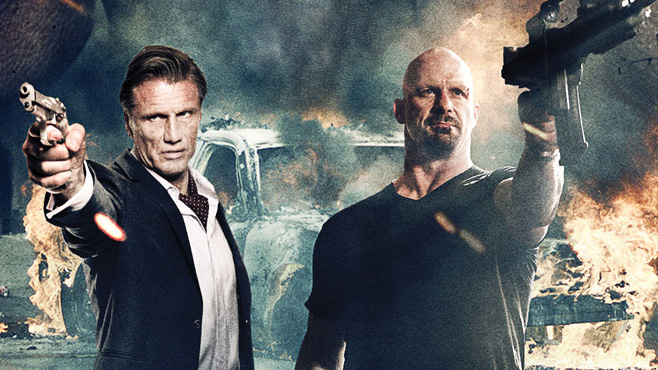 This is one of those movies where a lot of improbable shit happens.  For example, it’s improbable that nearly every bad guy is a martial arts expert.  It’s also improbable that you’ll get 117 rounds out of a 20 round magazine.  Actually, that second one is impossible.  But this is the good type of improbable.  The 80’s type, it’s really good to see conversations become increasingly agitated before being settled with a 360 kick and it’s another movie where Dolph reunites with an Expendables cast member.  In the form of Stone Cold Steve Austin.  This type of movie is for a certain fan, besides the hardcore Austin/Lundgren fans.  It’s for people who don’t give a shit about what the critics might say and it’s also made by people who don’t give a shit what the critics might say.  The look on Dolph’s face throughout makes it obvious:  This movie is just for laughs.  Violent laughs.

There is merely the question of whether or not it can fill an extremely bored 90 minutes.  It can, if you’re a fan of these two.  To clear his son’s debt, Austin must deliver a ‘Package’, Transporter-style, to Dolph.  Dolph is an anti-hero here, Austin the hero.  With the bad guys gunning for both, until the end when there’s a half-decent swerve.  The only guy playing it straight is Austin, which he always does (maybe he doesn’t get it.)  It’s also probably the first time I’ve seen him wearing a suit since an angle way back in ’98 with McMahon in the WWF.

If you’re pacing the room with boredom, you could do worse than this movie.  It actually reminds me somewhat on Cobra, or sort of like its nasty, trailer park trash nephew.  Reminds me on Cobra in the sense of how ludicrous it is.  I mean, if one of your men is in a shack fighting an enemy, is the best way to deal with the problem to bring out a light machine gun and riddle the whole building with 3,000 rounds?  In broad daylight?  And is it likely that both the antagonist AND protagonist make it out alive?  Fuck no, got anymore then?!  Lundgren is the best part of this show, but it looks like it’s another one of those 2-week shoot jobs.  Not good enough.  The music also sounds offensively cheap, even for a DTV movie.  It’s a pretty weak movie, but a pretty strong DTV movie.  Not like one of those Seagal DTV’s where it’s 100% laughable.  This movie actually has some reasonable manly retro fight scenes.

Wise people will probably take care to avoid this.  But it’ll appear on TV some night and is a good time killer if nothing else.  It’s some funny shit.