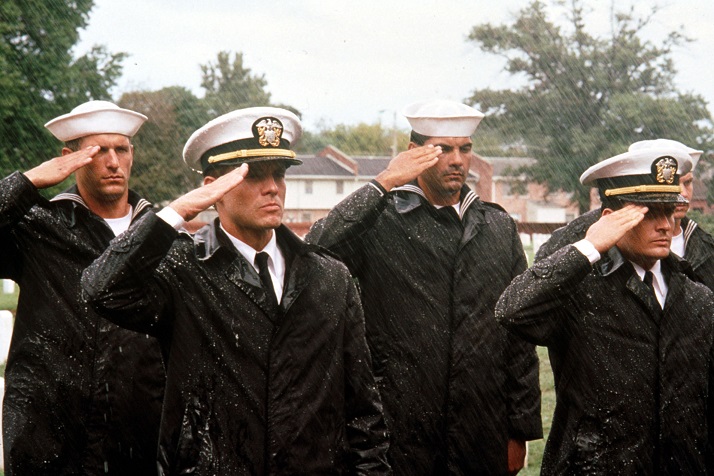 For some reason I started thinking about this movie this week, because it had been so long since I’d watched it.  Then I Googled it and found that it was sitting at a 5.5 on the IMDb and a paltry 19% on RottenTomatoes.  Then I thought… no way!  How can they shit on this movie like that?  It was pretty good.  This lead me to actually check the reviews on RT and sure enough, there were pissants complaining about perceived ‘Arab bashing’, another whined that the movie was ‘macho’, while a third also bellyached that there were, quote, ‘hard men’, shooting things.  Seriously?  Complaining about machismo in a military movie?  What next, complaining about competitive spirit in a sports movie?!  Gentlemen, we have to go back, and defend this movie’s manly honor.

Consider the cast, Michael Biehn as the team leader.  Charlie Sheen as the trigger happy hot head, Denis Haysbert as the cool family man and Bill Paxton as the Barrett .50-wielding sniper.  This should already sell the movie.  They are the best of the best, and out to deal with some terrorists who have acquired MANPADs, which make them exceptionally dangerous.  But after a botched raid at the beginning of the movie where the missiles weren’t destroyed, team leader Biehn just can’t let it alone, and recruits the help of a specialist journalist (Joanne Whalley) in order to finish the job properly, taking down the dangerous terrorist that slipped his net.

The charge is that this was a military recruitment vehicle.  A Bush I era propaganda movie… and I’m like, so?  And?! Let’s remember that after Vietnam the U.S. Military was in serious disarray, with gangs having seized control from the officer class and preparedness in the toilet.  America’s love affair with this farcical army was over.  And it took ten years — most of the 1980s — to rebuild, purge the gang problem and to turn it into the lethal strike force you seen in Desert Storm, with movies like this being a celebration of this new-found confidence.  The SEALS were the best of the best and in this movie they’red pictured almost like rock stars with their own amazing Top Gun style theme tune (you’ll think, damn, that’s where I heard that theme!).  I fucking salute this!

But I would like to get some grievances out of the way first.  The above plot is, you know, kind of rickety, thin even by 1990’s action movie standards and it got to me now and again, that little was happening and that Biehn’s character was doing something that is really something not within his professional purview.  The ‘elite’ complexion of the team is also lost somewhat now and again, with Biehn’s character not always in control of his men at critical times, with sloppy weapons handling. Bill Paxton’s time in the movie is also also a double edged sword.  On the one hand, this is a cooler Paxton than you’ll probably remember.  Playing ‘God’, he’s not his typical loud mouthed self, but rather the cool and collected one of the bunch. I really like seeing this type Paxton but… he’s fucking criminally underused, barely in the movie… what we now might call one of those ‘extended cameos’.

Sheen features most heavily in the movie

Aside from that, the movie delivers.  The action is competently filmed, having pre-shaking camera bluster with a strong emphasis on practicality.  For example some of the blood effects are especially good, as in it almost looks like they picked up some meat from a nearby butcher to simulate splattered brain effects.  Romantic subplots also show their head but are ruthlessly cut short and interrupted by man business.  About to get married?  No!  Abandon her at the altar because your country has suddenly called on you to defend it!  Urgent, the message has come through, it’s time to kick ass!

And also, Charlie Sheen is at his best here, with arrogant, chauvinistic winning occurring here, there and everywhere, including cutting off yet more romantic sap at the knees to rescue his beloved automobile!  Above all, man business gets handled first and foremost.  And all the while, Sylvester Levay is pumping a soundtrack to rival Jerr Goldsmith’s action scores through the speakers.

So this may not have been up there with the Sylvester Stallone or Arnold Schwarzenegger movies of the day but damn, it has aged well and it’s sort of Top Gun’s more violent, foul mouthed alpha cousin. Watch it again this weekend!