How quaint it is to look back at the initial theatrical release of The Expendables 2 almost five years ago in the late summer of 2012, after all the PG-13 rumours and behind-the-scenes gossip. Many of us hoped and expected an effortless home run after the rough-around-the-edges original movie. To its credit, this follow-up succeeded about as well as could be reasonably expected, pulling in over $300 million at the global box office (against its reported $100M production budget) and even receiving a generous 66% Fresh score on Rotten Tomatoes from the discerning critics (this is to date the only Expendables movie to stay Fresh on RT). I recall seeing it a grand total of nine times at the cinema and being thoroughly joyed by almost every moment of it. And now I revisit the movie on glorious 4K UHD courtesy of Lionsgate Home Entertainment, and I have to say that this is a worthwhile upgrade.

The Expendables 2 hits the ground running, opening with an astounding extended action sequence spanning several locations as the team rack up a huge body count and blow shit up real good. It’s a total gas, one-upping the awesome mayhem of the first movie to announce the return of these bad boys in an adrenaline-charged fashion. The Expendables 2 is mercifully lean as well, progressing at a ripping pace as it works through exposition, tough guy bonding time and bursts of top-notch action which strain believability in all the right ways. Surprisingly, character development is far better here than in the first film – this is a true ensemble piece, showing the team working together and partaking in several amusing group discussions in the downtime between all the violence. The camaraderie between these tough guys leaves little to be desired, and each character has a distinguished presence. They also seem to be more cultured and have more depth, with character quirks being introduced through the consistent bantering.

With Stallone having found The Expendables such a mentally and physically punishing endeavour as writer/director/actor, extra muscle was recruited to take some of the stress off Stallone’s shoulders for this sequel. Thus, Con Air director Simon West helmed the picture, and his filmmaking is assured and sturdy (some shonky visuals notwithstanding). Gone is the shaky-cam of the first film, replaced with a smooth routine of wide shots and coherent editing. When Expendables 2 is locked in action mode, West offers up plenty of carnage and wanton destruction, observing the muscular heroes as they use big guns, knives and even fucking rocket launchers to destroy everyone and everything in their path. The body count is well above a hundred – this is a true ’80s action film in spirit which lines up a cavalcade of nameless extras to be slaughtered by our favourite heroes.

Despite its strengths, The Expendables 2 is still not quite perfect. Apparently the film was initially intended to be PG-13, and at times it does feel like it’s pulling punches, though there are still some agreeably violent action beats (and the blood is a good mixture of practical squibs and CGI blood). Furthermore, while the cinematography is solid in terms of framing, the camera quality is at times astonishingly shoddy, as if a lot of shots were digitally zoomed in leading to a loss of resolution. West and cinematographer Shelly Johnson also bathed the picture in washed-out colours of ashen grey, and one must wonder if the film might have been superior with a more colourful look. There is only so much you can do with cheap Eastern European locations, I guess. 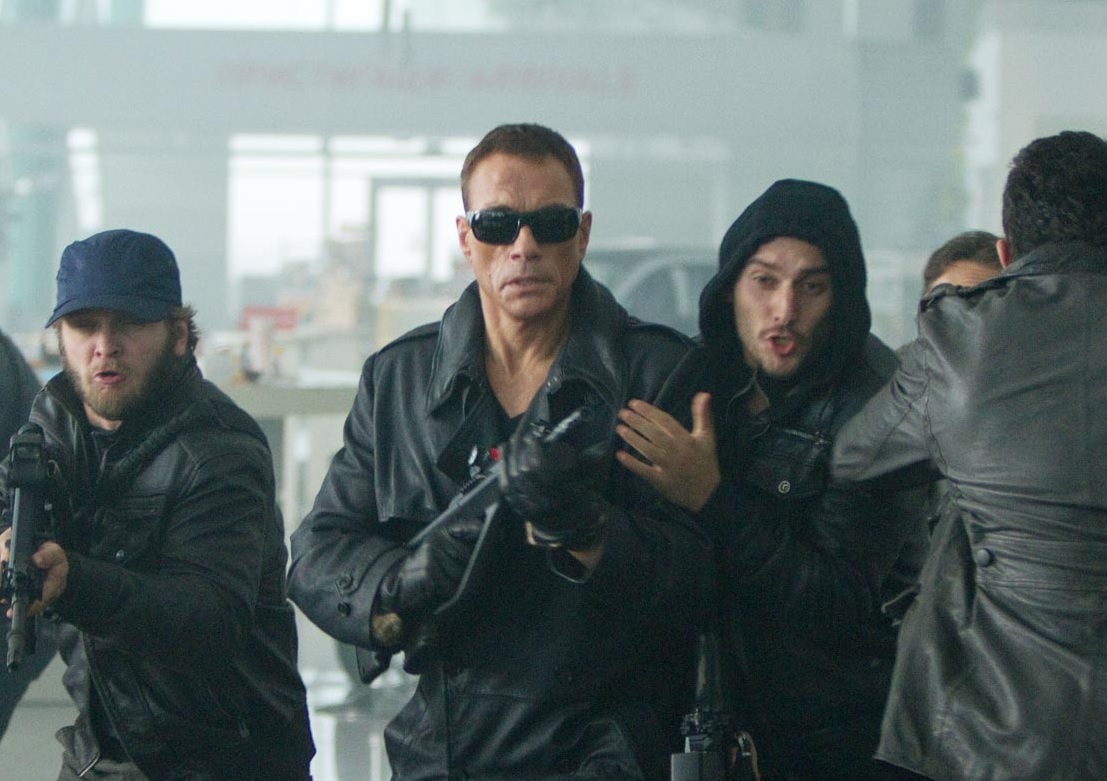 Free from the initial burden of expectations hovering over this sequel, and far enough removed from the hate it received (for goodness sake, the first DVDRip that went on pirate sites had terrible audio sourced from a Cam version, and people said the music sounded dreadful when they could have listened to the soundtrack on fucking YouTube and confirmed the pirate copy was just awful), I feel like we can judge The Expendables 2 a bit more evenly, and it still holds up five years on, though you are left to bemoan certain imperfections. Van Damme remains an excellent villain who consistently chews up the scenery (director Simon West has said he was hard to predict and always did something different each take), but he doesn’t do enough killing, and Scott Adkins is severely underused. The movie feels too cobbled together at times as well, with actors’ schedules meaning that Jet Li gets convenient separated from the group in the beginning before they encounter Schwarzenegger, and Statham sits out the big shootout on the NYC set. Plus, the Statham/Akins fight is still a missed opportunity. And then there’s the matter of the CGI, such as the motorbike/helicopter action beat that really should have been cut.

It’s certainly interesting in my mind that The Expendables 2 is often slammed for being too jokey and self-referential, when that’s precisely the type of movie that I seem to remember a lot of fans asking for. For the first Expendables, Sly picked his own path, opting for that dark Walter Hill-esque tone, painting the titular team as outright antiheroes and introducing a running theme of redemption to create some thematic underpinnings beneath the orgy of violence. But not everybody responded to this vision, which is why things were changed to a certain extent for The Expendables 2. Ultimately, despite its shortcomings, this sequel is a lot of fun, and the action is comprehensible and entertaining, spotlighting a still-impressive ensemble of badasses. I still wish there was more at stake, and more of a sense that these tough guys are in danger, but where else will you see Arnie, Sly and Bruno standing in a line emptying hundreds of rounds of ammunition? 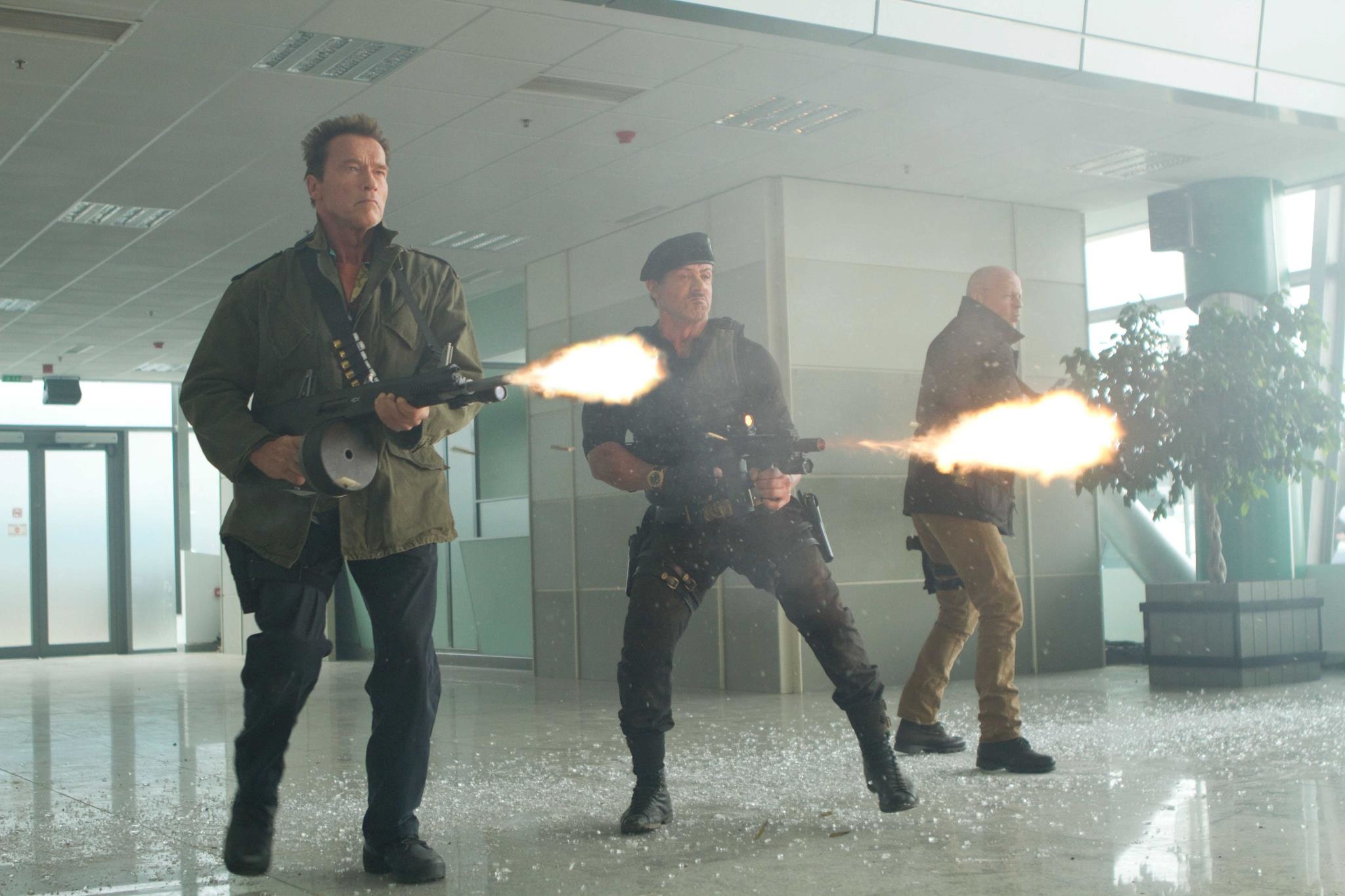 A bit over 12 months after its initial launch, UHD still remains somewhat of a niche format, only really embraced at this point by more avid film-lovers and cinema connoisseurs with the proper equipment to fully appreciate what 4K has to offer. At this point, Lionsgate appears to be one of the only major distributors willing to dig into the back catalogue as much as possible – we also have Dredd and Ex-Machina coming soon on 4K, and James Mangold’s 3:10 to Yuma recently debuted as well. So, how does The Expendables 2 stack up on 4K Blu-ray? Pretty damn well, actually. This first sequel to Stallone’s ambitious man-on-a-mission actioner was shot on 35mm film stock but only completed at 2K, presumably rendering this an upscale minted directly from the digital intermediate. With a more competent HEVC / H.265 encode, a higher bitrate and a fresh HDR10 grade, The Expendables 2 is given fresh new life on this new format, looking even better than it did at the cinema as a result.

Upfront: Yes, The Expendables 2 has never been a good-looking motion picture from a visual perspective. Shot mainly in drab Eastern European locations, it looks consistently overcast, grain/noise has always been heavy, and then there’s the infamous discussions of the picture quality which even prompted the filmmakers to release a public statement to address it. I can live with grain, in fact I prefer it, but damn some of the close-up shots have always looked horrid, evidently because the 35mm negative from the camera was captured at 2K resolution and somebody decided to change wide shots to close-ups at the last minute. If the negative was captured at 4K, 8K or even 16K, the shots wouldn’t look as obviously shonky, but 2K? Yeah, it’s going to look muddy, unrefined and messy. And it still does. Lionsgate have chosen to not alter a single thing or try to improve the PQ, embracing the baked-in flaws of the digital intermediate and doing what they can. The added resolution means that grain is much better resolved and details are visibly tighter, but the HDR10 also brings out stronger highlights and shadow detail than ever before, not to mention blacks are truer. 4K allows for a wider colour gamut, and even for a film like this, the upgrade is noticeable. Flipping between the 1080p BD and the 4K, you can see improvements instantly.

Of course, the first movie does look superior because it has always been superior from a visual standpoint – it carries a more vibrant look and possesses more natural-looking grain, whereas this sequel can look noisy one minute and waxy the next due to the nature of the production. The Expendables 2 is certainly inconsistent on 4K, but considering the source, this is the best the film can ever look short of re-scanning the film elements (like that will ever happen). Oddly enough, the CGI blood actually looks more convincing on 4K. If you’re 4K compatible and enjoy this movie, the upgrade is a no-brainer. I certainly don’t regret buying the movie once again.

When The Expendables 2 first debuted on Blu-ray, Lionsgate imbued the disc with a DTS-HD MA 7.1 track, as well as a Neo: X 11.1 track, making it one of the first titles to usher in the revolution of DTS:X and Dolby Atmos systems. Appropriately, Lionsgate have produce a fresh Dolby Atmos mix for the movie’s 4K debut, just as they did for the first movie. I only have a 7.1 surround sound system so I cannot fully comment on the Atmos track, but I can say that the audio remains utterly superb, with aggressive subwoofer activity and the surround channels being put to good use. Say what you will about the movie’s visuals, but damn you can’t fault the audio.

All the extra features are over on the standard Blu-ray in the set, which is Region A-locked by the by. Simon West’s commentary track remains informative and interesting, though it remains frustrating that he speaks about so much excised footage that we still haven’t been permitted to see. I mean, Lee breaks up with Lacy in a deleted scene, and that has been accepted as canon since Charisma Carpenter didn’t return for the third movie and there’s no mention of the pair getting married anymore (to the best of my recollection). So, we still wait for that extended cut. Elsewhere on the disc, there’s about an hour and a half worth of video extras, including a few nice behind-the-scenes segments as well as documentaries on ’80s action heroes and real-life mercenaries. The lack of a really meaty documentary is, again, quite frustrating, especially given the amazing making-of documentary that was produced for the first film. Deleted scenes remain scarce but nevertheless interesting, and the gag reel is a nice laugh.

I recommend this package whole-heartedly, in spite of the in-built shortcomings. The first two Expendables movies in 4K made for a beautiful double feature on my 65″ 4K OLED screen. I love these movies in their own way, and they hold fond memories of seeing them at the cinema. Others can continue to hate on them – hey, I still feel the franchise never reached its full potential when it was certainly poised to – but I’ll be over here enjoying what we have.