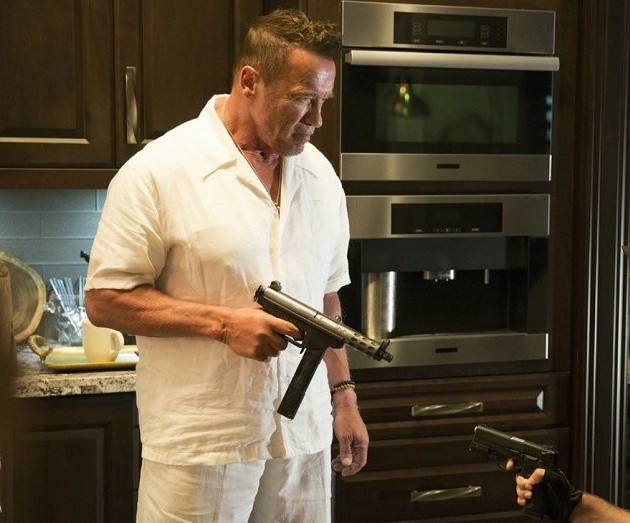 Run Time: 93 Mins
Rated: R
What To Expect: A scam, a con job, the worst film Arnold Schwarzenegger has ever made, or ever will make

About 15 punishing minutes into this disaster, a man vomits on the floor before a faraway shot shows Arnold Schwarzenegger firing an RPG towards the camera.  Except it’s not Arnold Schwarzenegger, it’s a double, with a CGI rocket using Sega Genesis processing power.  Vomit, an actor who doesn’t show up and awful CGI, these set the tone for this ‘movie’ and yet they don’t even begin to describe how truly awful it is.  Nevermind Killing Gunther, here, we see Arnold kill his own career.

First, let’s address trailer for this hoax.  It’s edited and presented in such a way where it looks like we’re getting a regular movie featuring Arnold Schwarzenegger.  Instead, what we get is a ‘documentary’, a fly on the wall tag along with a bunch of assassins chasing the deadliest killer ever (there’s your story, in one sentence).  This really is an ambush, because by the time you’ve rented it it’s too late; realizing you’re not actually getting a movie.  Also, staying with the trailer, each version officially uploaded to YouTube has a thumbnail of Arnold Schwarzenegger.  Why?  He’s barely in the movie.  And for example, we also see Arnold blow up a yacht in the trailer… well, that’s how they edited it to look, something different happens in the movie.

We all know about the DTV cameo con, where an actor will show up for minimal work in a poor movie, with his appearance spread thinly throughout the movie.  But this dog shit is a new low and the worst abuse of it I’ve ever seen.  Arnold Schwarzenegger doesn’t show up, at all, until the back end up the movie.  Maybe about 65 minutes in.  Then you think, well, the stuff he filmed must now fill out the remainder of the movie.  Then the movie ends prematurely, which turns out to be the most gracious thing it gives its viewers (mercy) with a 7.5 minute end credits roll.

That also reminded me, the ’93 minutes’ has an intro credits scene too, so you’re getting maybe 9+ minutes of ‘credits’.  I mean you’d have to wonder, how can a movie that is so cheap and ghastly stretch out a 7.5 minute end credit roll?  How can there be so many people to credit in a video that YouTube celebs would be ashamed to upload?  What is this, fucking Lord of the Rings?  Of course, it’s just another way to scam the viewer by cutting corners, big ones.

But seriously, you have to watch this movie, to appreciate just how bad it is.  I was stunned at how hoaky it is that it has to be reviewed and documented as cinematic history, from the awful CGI muzzle flashes to the flashback photos that look like they were cooked up in Microsoft Paint (the only time I laughed, not for the right reasons).  All of this isn’t even the worst part; the agonizing trek we have to go through, following a cast of no-name bums trying too hard to be funny using a ‘documentary’ filming technique not dissimilar to the brawling videos found on WorldStar Hip Hop.

Shame on Arnold Schwarzenegger.  He has shown nothing but outright contempt for his fans in this shocking, shocking mess.