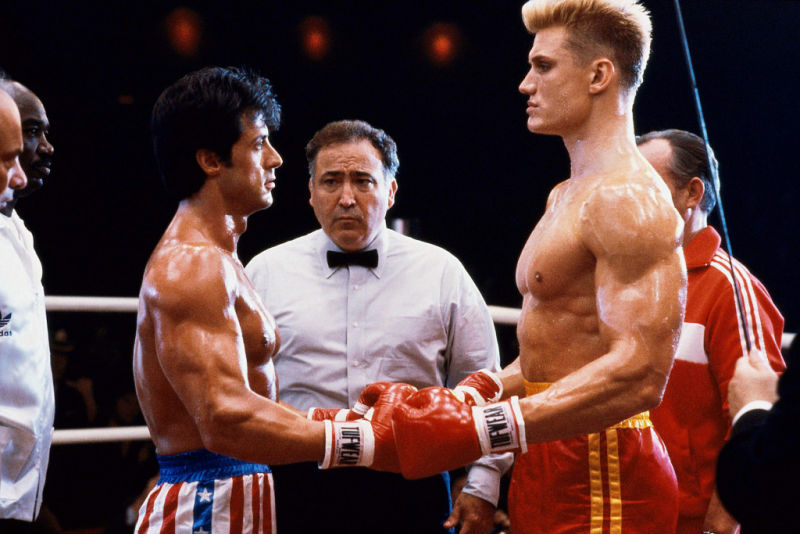 Creed II looks set to be one of the bigger manly movies coming our way.  The big selling point is the return of the Dragos, note plural.  Both Ivan Drago and his son, Viktor Drago, played by Dolph Lundgren and Florian ‘Big Nasty’ Munteanu respectively. Brigitte Nielsen will also supposedly return as Ludmilla Vobet Drago.

But how do they enter the new movie?  Probable SPOILERS are below, coming from Sylvester Stallone’s official forums.

Drago shows up a little disheveled, somewhat Drunk to Adrian’s, waiting for Rocky. Rocky arrives, told by the hostess of his “guest”. Rocky hands her his leather jacket (some takes he hangs it up) and he tepidly walks to the table and sits. Drago gets loud, tells of his story, how his life was hard after 1985, As this talk is happening Victor Drago walks in the front door standing there menacingly he never approaches rocky or his father. Drago stands rocky stands fist are clenched just as something is about to go down Drago turns and awkwardly walks to the front of the restaurant stopping at a picture on the wall.

The picture is of Apollo creed and Drago taps it with his fingers and in a very cocky way he says “good picture” and has a evil smirk on his face- both drago’s walk out the door and rocky walks to the window cautiously. He looks outside to ensure the drago’s have left. Much more happens after this scene but that’s all you’re going to get.

This comes from someone who has been spending a lot of time following Sylvester Stallone around, and sounds about right.  So it’s probably true.