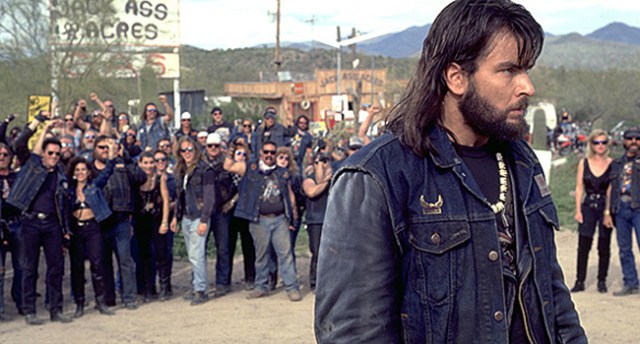 Some films lose the run of themselves.  They get carried away in their violence, swearing and acts of wanton criminality that they border the line of parody to start with and then by the end jump right over it.  The story missions in the Grand Theft Auto game series kind of wink and nod at old 80’s/90’s crime movies, well this Charlie Sheen movie is like one of those gaming missions, in movie format, running for over 100 minutes.  It’s Point Break on motorcycles and it’s perfect movie to get drunk to.

After being kicked off the force for attacking his police chief, rough around the edges cop Dan Saxon (Charlie Sheen) is given an opportunity to redeem himself by the FBI.  He must infiltrate the murderous biker gang led by Blood (Michael Madsen) in order to initiate its demise and stop its drug dealing and criminal endeavors.  Along the way, Saxon is helped by a sultry journalist (Linda Fiorentino), but soon finds himself questioning which side of the law he’s really on.

The film egregiously rips off Point Break, even if this one is supposedly based on a true story.  Man infiltrates criminal gang, the leader of which takes an irrational liking to him, which leads to man developing friendship with leader and blurring the lines of morality and the law.  What makes this film different from Point Break or The Fast & the Furious however is just how outrageous the whole affair is, and how suspect the writing is.

Sheen rolls into a dangerous biker gang and starts blowing shit up with dynamite, claiming to hail from another fictional biker gang from lands afar.  Madsen, as leader, immediately likes the cut of his jib, apparently not having too many brain cells to rub together.  Because he soon has the cop riding with him at the front of the gang (but not before testing Sheen’s manhood by, for example, challenging him to smash into a redneck bar – see video).  The subplot which has Sheen hating on cops because his cop uncle beat some manners into him as a child is, frankly, unintentionally hilarious.

This ‘backbone’ of the story leads to Sheen attacking yet more cops and become more biker, less lawman, thus the viewer is challenged to recognize this ‘aha’ moment as we learn what drives the character.  In reality though, the entertainment comes from the total and utter give no fucks attitude of the whole movie, it’s like Cobra or Commando, it just pushes the envelope with crazy violence. Sheen is trolling and Madsen’s give-no-fucks, what-are-my-lines acting shtick add to the hilarity and character, Madsen in particular seems keenly aware of how outrageous the whole thing is.

This film must also, surely, have the most relentless use of the word fuck in motion picture history.  Also, what’s especially funny is that in the end, when Madsen finds out Sheen is a cop, he still doesn’t give a fuck.  If this isn’t a cult manly classic, it’s close!