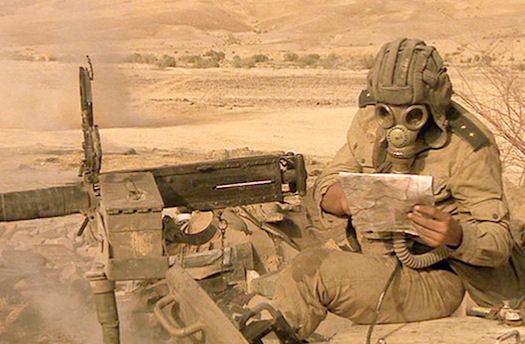 Run Time: 111 Mins
Rated: R
What To Expect: The best tank movie ever made
Aside from Das Boot, of all the war movies that came out in the 1980’s, this is the best.  I’ll go one further – it’s one of the best war movies ever created.  It didn’t have the promotion of a typical 80’s movie.  It wasn’t hoisted on the shoulders of critics either, so it wasn’t particularly well known.  Like Rambo III, this movie suffered as well because it had the right message at the wrong time.  Rambo in 1988 was blowing up commies just as the Cold War thaw set in.  Since the tank commander in this movie is the antagonist, it falls into the same trap – people didn’t want to hear about it and worse, the actual war had ended.  The fact that it isn’t well know doesn’t mean its a cheap ass picture though.  It’s well shot, they went out of their way to get the real tanks (captured Arab tanks), shoot in in a realistic landscape and got theater distribution by Columbia Pictures.

A Soviet tank crew gets cut off from its unit, lost, then hunted by the Mujahideen in a game of cat and mouse.  I mean, okay, this is a propaganda movie.  But who cares.  The hunters mean business, but so does the tank commander, who rants that he was taking out German tanks as a child and wasn’t about to lose his vehicle to some Afghans.

What this movie gets right first and foremost is having a killer screenplay.  It’s a taut thriller, take your pick of any random 60 second scene and you’ll find it’s relevant and something necessary is happening.  Isn’t it funny that the soldiers in Oliver Stone’s or Kubrick’s movies had time to ponder life like its some meeting in a shrinks office?  There’s none of that shit in this movie.  Ask the meaning of life –  if you’re alive in the next hour.

Which leads to the real selling point of this movie;  its realism.  It’s authentic right down to the nuts, bolts and lingo that are in a real tank. Instead of those questions about the meaning of life, in this movie you’ll find the Commander tearing his driver a new asshole on the merits of conserving brake fluid during a hot war.  This is the Das Boot of tank movies.  That sub crew relied on being kept afloat by a simple rock or keeping the electric engines running, this crew relies on their (sturdy) T-55 in the same way.  Some try to argue that the proverbial ‘Beast’ of the title is the tank, but it can’t be.  Because the tank is crucial to the survival of the crew, and their expertise is crucial to keeping it running just enough to make it to safety.  Ammo, fuel and hope are scarce.  This is a survival action thriller that manages to incorporate all of that realism without losing any of the excitement.

The best release of 1988 by some distance.  They must have had great consultants for this movie – but hopefully not real Communists.