Back when Blu-Ray made its entrance just under ten years ago, I kept an intent eye out for this.  And now even though we’re into the 4K generation, I suppose it’s better late than never to get another release.  Fabulous Fillms were the first to distribute Universal’s remaster of The A-Team on Blu-Ray and they sent ManlyMovie this box set last week, limited edition version.  I have to say, I had a blast binging on this over the weekend, a dual kick of nostalgia and clean, deep colours and detail.  It’s pretty much been worth the wait. Schultz and Benedict on commentary

As far as extras go, the first release was quite lacking for me and it’s my only sore complaint about that release.  Here again we carry over with two featurettes, a ten minute mini doc with the late Stephen J. Cannell, where he gives some interesting trivia.  Such as the inspiration for the show being a real ‘A-Team’ rescuing a senator’s relative from a Turkish prison, with Mad Max 2 also being a heavy inspiration.  The second is a show called The Great 80’s Flashback, a half hour documentary about 1980’s television. 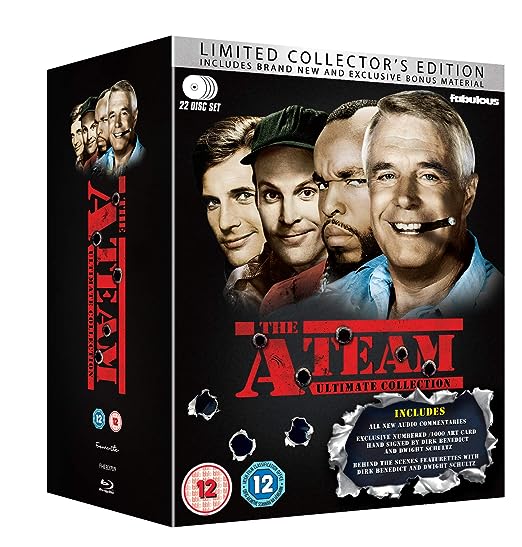 With this limited edition, commentary from Dwight Schultz and Dirk Benedict (Murdoch and Face) is added.  And it’s not some lazy hit and run deal either.  While there are too many episodes for them to cover, they do put in around 6-7 hours of commentary.  They’re also not phoning it in and share an obvious chemistry talking to each other.  It’s a lot of fun listening to these two funny men going over select episodes and sharing insight.

The release also contains a limited edition signed collector’s card, but only 1,000 copies like this are available, so you’d better be quick.

At any rate, this show is a winner.  It gets the meat and potatoes stuff right, the remaster is heavyweight stuff and all seasons, including the first, have survived in pristine condition.