Run Time: 128 Mins
Rated: R
What To Expect: The death of a franchise, and Arnold Schwarzenegger’s career

It’s funny that Arnold Schwarzenegger willingly killed his own career in a Terminator movie, since (after Conan) it was a Terminator movie that kick started his career.  Terminator: Dark Fate is a film so bad that I cannot in good conscience give it even 1/10.  It’s a film that shits on canon, has flagrant CGI abuse and… get this, features a T-800 helping its wife with the groceries, greeting her with ‘Hi Honey!’ and being a ‘good listener’.  This is no lazy screenwriting but deliberate sabotage, political I would say, with Schwarzenegger being complicit.

The film is directed by Tim Miller, produced by James Cameron, ignores the crappy sequels, is a direct follow up to the second movie and features the return of Linda Hamilton too.  It’s almost like it couldn’t go wrong.  A new timeline emerges, Skynet no longer exists, but an alternate entity called Legion.  It is no longer interested in the Connor family, but instead is interested in terminating the Ramos bloodline, with ‘Dani’ (Natalia Reyes) being the new ‘mother of the future’.  Legion sends back a new Terminator (Gabriel Luna) to the present day to kill Dani, whilst the new resistance sends back a defender, Grace (Mackenzie Davis), a human/cyborg hybrid to defend her.  Sarah Connor also shows up and decides to help.

From top to bottom, I hate this film.

Terminator 2: Judgement Day, as good as it is, is a remake of the first movie.  The ‘going back in time’ theme, especially with an underdog defender battling a ‘new deadly model’ should’ve finished right there and then.  But then they went there again, and again.  And again.  And each time it becomes more predictable, but worse, this time it’s basically an excuse to ram home some feminist propaganda.  It feels like the script was conceived via a committee meeting of Tumblr bloggers, with characters from The Terminator replaced with millennial females.  Grace is a poor man’s Kyle Reese.  Dani is a poor man’s Sarah Connor.  And Luna is a poor man’s Robert Patrick.

Arnold Schwarzenegger shows up in the third act, but only for Hollywood to make a statement: One of the best and most masculine characters in cinematic history will be the subject of a symbolic sacrifice on the altar of Hollywood’s bold new super-left trajectory.  Schwarzenegger plays a T-800 sent to kill John Connor as a teenage boy, it is not a ‘good’ Terminator like the T2 one, but simply another assassin like in the 1984 movie.  In a flashback, it succeeds in killing Edward Furlong’s CGI likeness – more symbolic sacrifice I’d say… they really seem to hate John Connor in this franchise!

Here the story gets really bad.  Having killed Connor, the Terminator finds itself a woman.  What the fuck… remember; this is supposed to be identical to the 1984 killer.  Having shacked up with a woman, it then becomes domesticated, becomes a step-father to a child and learns to be Mr. Mom.  It boasts later in the movie of how good it is as a doting husband, and happily greets its wife and helps her with the groceries.  The movie tells us that it has ‘learned’ this stuff.  But who gives a fuck about canon, eh?  Because a killer Terminator must have its chip removed in order to do that.  No explanation is offered as to why a T-800 shows up and ‘turns good’, with a fancy hairdo.  Both of these things are explained for the one in T2 – Connor’s men reprogrammed it and made it look ‘1990’s’.  Gotta love glaring timeline plot holes. 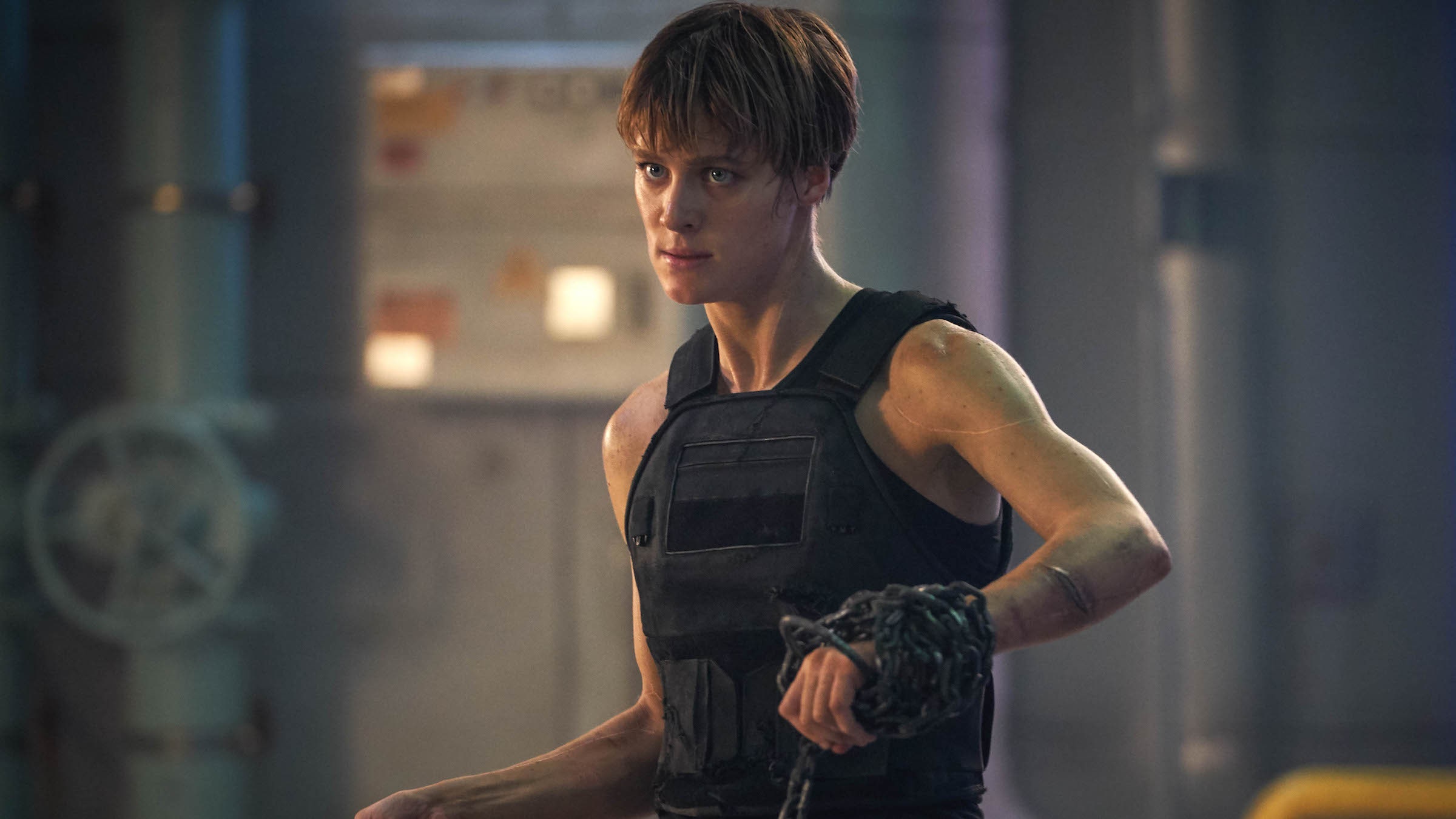 The film seems more concerned with projecting politics than entertaining us

I could rant all day about how much I hate this movie.  Take for instance the chief villain, Luna’s ‘new’ Terminator.  It is nothing but a rip off of the TX, which in itself was shit because it was a creative and logical step down from the T-1000.  Luna’s Terminator has a chassis, which instantly makes it inferior to the T-1000, which is reflected in the action sequences which must be written to accommodate this weakness.  The action sequences themselves… terrible.

There are zero memorable set pieces like in the first two movies or even the shitty sequels.  What we’re offered is silly shark jumping, the likes of which are found in Fast & Furious or The Avengers.  So when a politically-motivated hack like David Goyer knows that CGI is now cheap and easy to use, we expect, and get, ‘wacky’ action scenes.  Where the laws of physics go out the window, characters are thrown around the screen like darts and frisbees… it becomes so implausible as to be visually exhausting, sending the viewer into a state of stupefaction.  Walter Hill once said that if an action scene isn’t at least somewhat realistic, it’ll fail in its objective.

Elsewhere, Linda Hamilton looks like she’s been had.  Her ‘performance’ jumps from contemptuous trolling to despondent and sad.  It’s obvious that she knows what a massive pile of shit she had signed on for, it’s written all over her face.  Pity we can’t say the same for shameless box office whore Arnold Schwarzenegger; it’s sad knowing he doesn’t care and seems to think the whole thing is quirky fun.  Jim Cameron too.  Fuck them.  Arnold is done, after Genisys, Gunther and now this, goodbye.

Even the music is terrible.  Aspiring YouTubers do better.