JAPANESE MAN TO GET REVENGE ON SLEAZY CAR SALESMAN | ManlyMovie

JAPANESE MAN TO GET REVENGE ON SLEAZY CAR SALESMAN Entertainment Weekly has released a new image from Cobra Kai Season 3.  It features the return of Chozen (Yuji Okumoto) and he appears to be settling a score with sleazy car salesman Daniel LaRusso.  LaRusso, you may recall, tried to steal Chozen’s woman, something the serial pest cannot seem to help himself with.

He then turned the man’s family against him, before recruiting a crowd of eighty people to cheer him on and engage in further mind games whilst assaulting him.  Now though it appears that it’s mano-a-mano and there is nowhere for LaRusso to run!

When we initially [reunited] it was via a phone call, and he wanted the two of us to get together to rehearse the fight scene together. Because we had probably four significant fight scenes in that episode, so he wanted to bring me out about a week early to Atlanta to go over and rehearse the fights — which at my age, that’s a blessing. We had a chance to get together and rehearse, and then catch up and talk story in between kicking each other’s asses.

It seems that LaRusso is going to get his ass beaten four times in one episode!  Never rub another man’s rhubarb, what is it about this cardinal life lesson that LaRusso does not get?

One thing is for sure, the beating that LaRusso gets from Chozen will be nothing like the beating he’ll get from Mike Barnes. 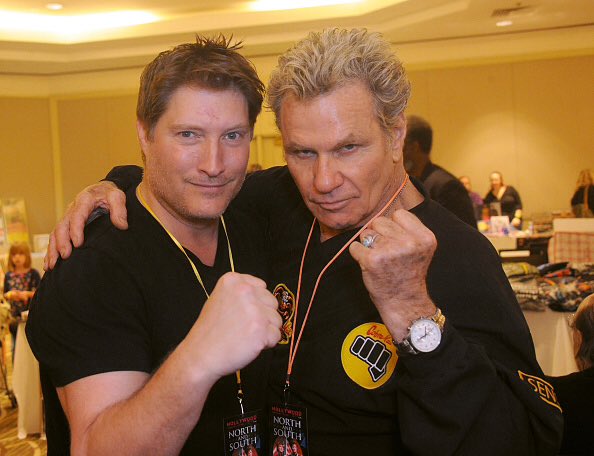