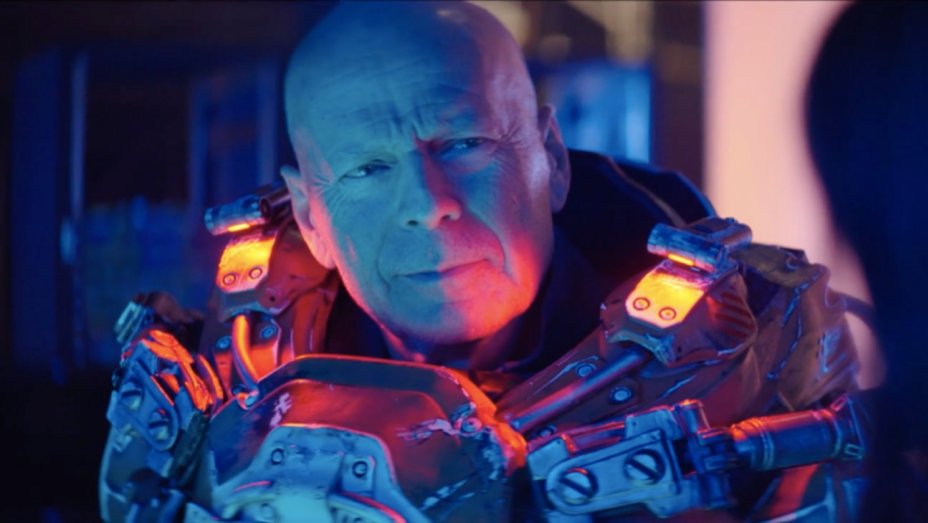 Director Edward Drake’s Cosmic Sin (2021) is a keen example of when low-budget films aim to be too ambitious. They end up failing spectacularly. This is the case in this unexciting and cheap science fiction thriller.

In 2524, General James Ford (Bruce Willis) and General Ryle (Frank Grillo) aim to stop a virulent alien invasion by attacking the species’ homeworld before they attack Earth. These aliens can disguise themselves as humans. To defeat them, Ford and Ryle may have to commit a ‘Cosmic Sin’ by using a quantum bomb (Q-bomb) to eradicate the extra-terrestrial civilization from existence.

With production values that make Captain Power and the Soldiers of the Future (1987) look sleek and contemporary, Cosmic Sin is second-rate on all levels. The futuristic military base looks like a High School Gymnasium with fluorescent lighting. Also, there are the usual CGI muzzle flashes employed. Costume design is awful as well. Exoskeleton suits seem clunky, goofy, and uncomfortable. These suits only cover half the person’s body.

Bruce Willis, in particular, acts barely interested and carries a pained, wincing expression on his face. Both Willis and Grillo disappear for long stretches at a time, leaving the audience with many characters nobody cares about and meaningless filler scenes.

The Outer Limits (1995) TV series covered this sort of science fiction theme much better in many of their alien occupation episodes.

Cosmic Sin is not recommended for digital rental or purchase. Some actors need to know when to retire.