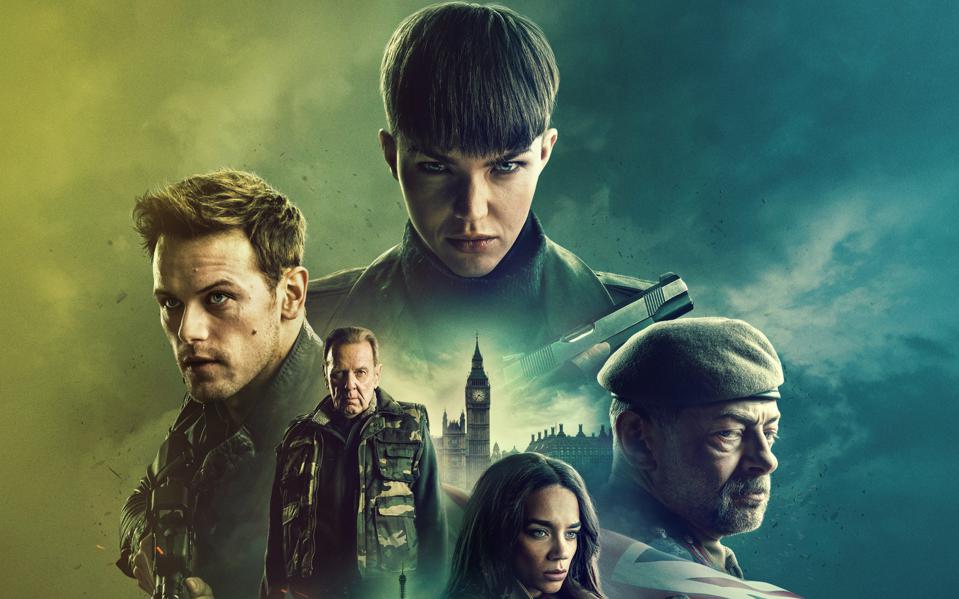 Run Time: 123 minutes
Rated: R
What to Expect: An overlong but passable, ‘Die Hard on a Train.’

Magnus Martens, director of many of the better episodes of the gritty CINEMAX series, Banshee (2013), offers few surprises in SAS: Red Notice (2021), a routine thriller in the Die Hard mold.

A Red Notice is an appeal sent by INTERPOL to authorities regarding a sought-after individual. The SAS refers to the Special Air Service, an elite Special Forces regiment specializing in counter-terrorism.

In the Republic of Georgia, a private military company (PMC) called the Black Swans is tasked with clearing a village so a transnational pipeline can be completed. The town is blocking the pipeline route. When the village residents refuse to vacate their homes and turn down financial compensation, the Black Swans attack.

These mercenaries employ flamethrowers to burn parts of the town. At the same time, one of their snipers picks off the remaining male inhabitants. Unfortunately for them, this carnage is recorded on a cell phone and uploaded online. The resulting furor causes the ICC (International Criminal Court) to issue a Red Notice and demand that the Swans are extradited to The Hague to serve trial for Crimes against Humanity.

The Black Swans are led by patriarch William Lewis (Tom Wilkinson) and his two grown children, Oliver (Owain Yeoman) and Grace (Ruby Rose). They are American-born but live and operate out of London.

With their options dwindling fast, the Swans decide to hijack a Eurostream train to Paris. Their new objective is to force the UK Government to admit its culpability in the deadly massacre, instigated at the behest of a multinational gas company and a crooked General (Andy Serkis).

Aboard the Eurostream train is top SAS operative Tom Buckingham (Sam Heughan) and his girlfriend, Sophie Hart (Hanna John-Kamen), whom he plans to marry. When the Black Swans take over the train and start holding hostages, innocent lives are on the line. This leaves Buckingham as the only person capable of eliminating the violent threat.

At two-plus hours, SAS: Red Notice runs far too long. When you look at films with similar themes like Crackerjack (1994) or Under Siege: Dark Territory (1995). In those cases, the runtime is between 96 and 100 minutes, not 123 minutes.

Also, the film suffers from an excess of characters, which undercuts Sam Heughan’s screen time, almost making him a supporting actor in his own movie.

Sam Heughan, while pleasant enough, does not bring anything new to the table. He does not have an abundance of charisma. However, he looked proficient in the more action-oriented parts.

On the positive side, the action in SAS: Red Notice is satisfying and gets quite bloody at times. Also, Ruby Rose as Grace makes an excellent villain. However, she is not quite up to par in some of her fighting scenes.

So far, in a year devoid of good action films, SAS: Red Notice may be worth a digital rental or purchase for your Friday night viewing.