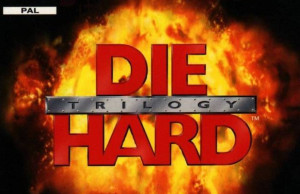 Moves and video games do not share a harmonious history.  This has always been the case right from the start.  Maybe the scandal of  E.T. The Extraterrestrial, the video game that arguably started video game adaptation messy divorce proceedings for years to come was an omen.  It was infamous, the game was so notoriously bad that 728,000 copies had to be buried in the wilderness.  Think about that for a minute, the cost alone of paying for the transport of .75 million cassettes via truck.  Yeah, that bad.  In reverse, movie adaptations of games have almost been as bad, with spectacularly ruinous offenders such as Super Mario Brothers or Paul W.S. Anderson’s 15 year reign of Biohazard terror.

There is an exception to every rule though and  Die Hard Trilogy was one such freak incident.  Developed by a small company called Probe who, as it happens, also developed Alien Trilogy for the ill-fated Fox Interactive, Die Hard Trilogy, somehow, managed to stand up as an honourable send-up to the main movie trilogy.

Production on Die Hard Trilogy actually began before a movie trilogy even technically existed.  20th Century Fox ordered the game from their sub division, Fox Interactive, who put British development team Probe to work on the game early 1994.  This was before a third movie, Die Hard: New York (later renamed Die Hard With a Vengeance) even went before cameras later that year in September.

Probe did not have much to go with with regards to the third instalment, but they had plenty to work from using the first two movies which had already been released.  Their orders were simple, stick to the source material.  An easy task then, since everyone, especially then, knew the movies off by heart.  But even still, Fox representatives would occasionally check in to see what was happening and to make sure fans were going to get a real Die Hard fix.  The game was set to be divided into three sections, one for the first, second and third movie.

“We didn’t have any production documents on the game”, lead developer Simon Pick as noted.  “I guess, if anything, the Die Hard movies acted as the games’ production documents”.  Faithfulness to the series was important, however the pursuit of John McClane himself proved fruitless, when the team were told that Bruce Willis’ services would push the budget beyond what was reasonable.  Die Hard was set to be a third person shooter – one of the first.  Die Hard 2: Die Harder was set to be a riff on Virtua Cop, with DNA from the real Renny Harlin sequel running through it and the third game was an adrenaline-fuelled driving smash ’em up, based largely on the Central Park rampage from the third movie.

Development took over two years to complete, with the final stretch putting huge pressure on the team, especially due to major reworks on the third game due to Fox being unhappy with accuracy with regards the actual movie it was representing.  “We were working seven day weeks for the last three months, because it was supposed to be a Christmas release and we were running late”, adds Pick.  The division of Probe developing Die Hard Trilogy also had less than half of the staff than Alien Trilogy enjoyed, although you could barely tell considering both final products.

Die Hard Trilogy was released as of writing this, 19 years ago today.  But the release wasn’t without minor controversy.  The crunch phase of development actually created problems.  The game, particularly the third game on the disc, wasn’t entirely finished.  Sony were unhappy with quality control on the game and were reluctant to release it, at least at that time.  But according to lead developer Simon Pick, Fox came to the rescue, sort of.  “Fox were getting more and more desperate.  I believe Fox forced it through Sony’s approval system because there were still crash bugs being reported after its release”.  Apparently if it was not for Fox’s significant pull, the game would have been delayed.

The game also had significant competition.  Tomb Raider in particular seemed to be eating into Die Hard’s chances, with a large breasted heroine encroaching onto McClane’s territory.  On Tomb Raider, Pick remarks: “Damn, why did it have to be so good?  No one’s going to buy Die Hard now”.  He was wrong though, since Die Hard Trilogy was a smash hit, selling millions and going platinum, like its cousin, Alien Trilogy.

In a sense, since it came after Die Hard With a Vengeance, Die Hard Trilogy is the last great outing for John McClane.  Many would argue that as an experience, it’s superior to the two sequels that followed in the 21st Century.  Certainly, we do at this site.  Its sequel, Die Hard Trilogy 2: Viva Las Vegas was received poorly.  Other games followed, Die Hard: Vendetta felt faithful, if clunky when it was released in 2002 and McClane has had some minor iOS outings since.  However Trilogy appeared at the right time, along with McTiernan’s movie, which was also the final ‘fan approved’ entry in the actual movie series.

As for Fox Interactive, arguably the most successful company to develop faithful movie tie-ins if only on account of their two action movie trilogies (Alien and Die Hard), they closed their doors in 2006.