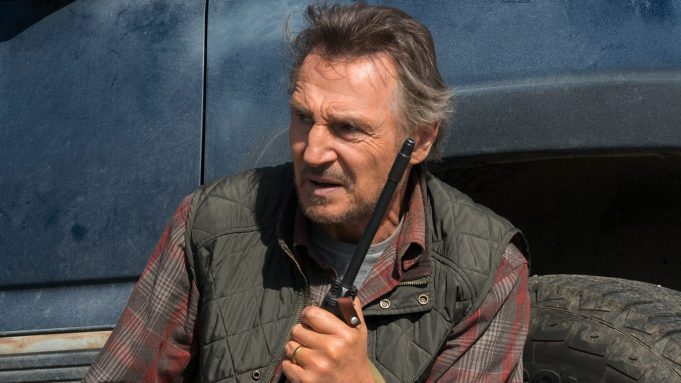 Run Time: 107 minutes
Rated: PG-13
What to Expect: A rancher must protect a young boy from the cartel in this routine but entertaining road trip movie.

Liam Neeson now enters the late-stage Charles Bronson phase of his career. For Bronson, this stage included films like Death Wish 4: The Crackdown (1987) and Kinjite: Forbidden Subjects (1989). While not as exploitative as those films, The Marksman (2021) is a decent entry in the on-the-run category of action films. Essentially an urban western where instead of a bounty hunter or cowboy, it is an ex-Marine Corps Sniper protecting a young kid.

Jim Hanson (Liam Neeson) is an Arizona rancher who also assists the U.S. Border Patrol by spotting illegal border crossers. Jim’s wife died of cancer a year earlier, and the Bank is repossessing his home. His step-daughter Sarah (Katheryn Winnick) is a Border Patrol agent. One day, he comes across Miguel (Jacob Perez) and his mom, Rosa (Teresa Ruiz), on a road near the border fence. They are fleeing a gang of vicious cartel members out to kill them. This gang is led by psychopath Mauricio (Juan Pablo Raba), a man who does not hesitate to kill anyone in his path. Jim attempts to help Miguel but is caught in a deadly firefight that sees Rosa murdered. Before she dies, she asks Jim to drive Miguel to Chicago to stay with his relatives. Despite Jim’s initial reluctance, he agrees to take her son north. Jim is up against a highly sophisticated gang of criminals capable of tracking his whereabouts.

Liam Neeson at 68 gives another reliable and dependable performance as Jim. Unfortunately, the same cannot be said about the supporting actors. Katheryn Winnick is surprisingly miscast and out of her element as a law enforcement official. Also, Juan Pablo Raba comes off as more henchman than ruthless leader. A weak foil for Liam Neeson’s protagonist.

Interesting to note as well is the appearance of Amber Midthunder as a gas station clerk. Amber will be seen next as the lead in the upcoming Predator movie.

Overall, The Marksman is recommended for a digital rental. It is an unambitious genre film that makes for passable entertainment.