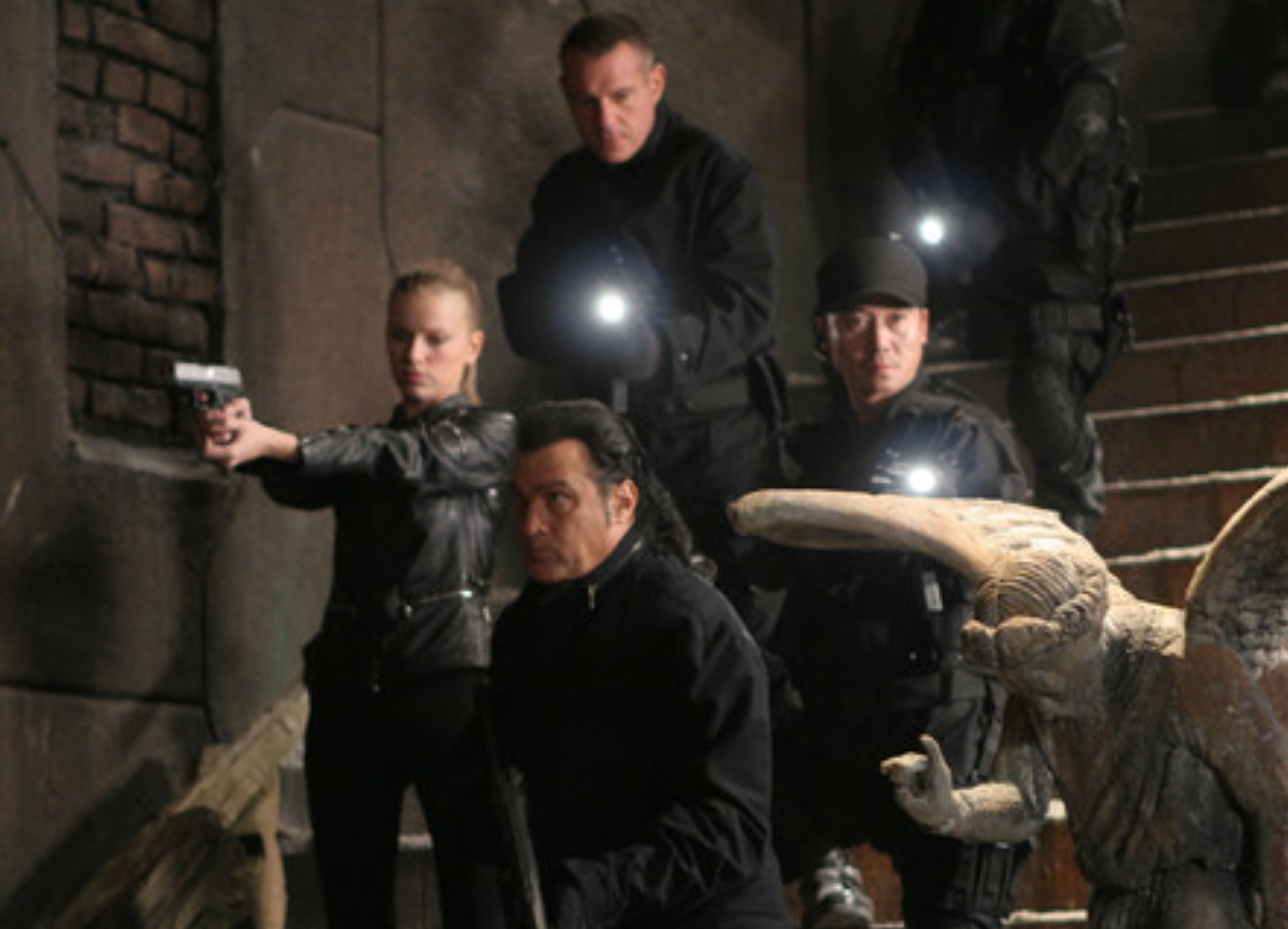 Run Time: 90 Mins
Rated: R
What To Expect: A poor movie, elevated by one man’s presence

This 2006 DTV movie starring Steven Seagal was torn apart by critics and fans of the man alike. It’s hovering down there around the 2/10 mark on the IMDb, a feat not easily achieved. This was pretty much a key contributor to the end of Steven Seagal’s career, with the notorious ‘Sheen dub’, where Seagal’s voice cutting out and being dubbed by a man who sounds remarkably like Martin Sheen, hinting at exceptionally odd, or lousy, production values.  Once, asked what the story was even about, the director replies ‘Who knows?’.  But I submit that this is ‘average’ for keen students of The Sensei.

Seagal plays Marshall, leader of an elite team of military men.  When his men take some sluts back to a hotel in France, they are brutally killed under mysterious circumstances.  As the movie develops, we learn that a dangerous new chemical, CTX, is being developed by corrupt military elements.  Thus, The Master must lead a new ‘Attack Force’ to assault the castle that they’re held up in.  Complete with knives fused to his arms, by which people will be stabbed in the head.

Early in the movie, a man with a knife mechanically attached to his arm slits the throats of good guys.  I thought that this would be saved for a boss fight for Sensei Seagal, possibly near the end of the movie. But within minutes, Seagal has confronted him, bent his wrist, and stabbed him in the forehead with his own knife. The knife so deeply embedded, you could hang a towel on it.  Impressive.

“He walks with an air of confidence rarely seen these days”, a subordinate says in awe.

“He’s a bad motherfucker”, agrees another nearby man who heard that compliment.

Good dialogue from a script co-written by Seagal.  Anyhow, Seagal goes for a coffee with a colleague.  “Revenge… is a two-way street”, mumbles Seagal, showing remarkable indifference to the massacre of his men, like he was talking about a blocked drain. Yet despite that, I almost cheered when he said it.  You see, for a hardcore student, you must compromise.  Sit through the atrocious story and you’ll see Seagal show up now and again, making out with female supermodels for no apparent reason that facilitates the story, or slapping secret agents who follow him too closely in his automobile.

Yes, make no mistake, it is a bad movie, but average for the right viewer.  The highlight being the infamous ‘Sheen dub’.  As mentioned above, about 30% of Seagal’s dialogue is dubbed by a man who sounds nothing like him, but accurately like actor Martin Sheen — perhaps Sheen is a fan of our hero.  Speculation is that Seagal changed the story on the fly (the villains in the movie were at one point touted to be extraterrestrials… yes, really.  Then they weren’t, then they were), then did not bother to return for additional voice work.  By the movie’s end, Steven Sheengal sounds quite fucking hilarious, as he threatens to slit the throats of assailants.